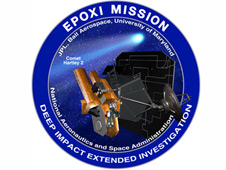 Logo of NASA's EPOXI mission, which is just one month away from its encounter with comet Hartley 2. Image credit: NASA/JPL-Caltech/UMD
› Larger image

PASADENA, Calif. - Fans of space exploration are familiar with the term T-minus, which NASA uses as a countdown to a rocket launch. But what of those noteworthy mission events where you already have a spacecraft in space, as with the upcoming flyby of a comet?

"We use 'E-minus' to help with our mission planning," said Tim Larson, EPOXI mission project manager at NASA's Jet Propulsion Laboratory in Pasadena, Calif. "The 'E' stands for encounter, and that is exactly what is going to happen one month from today, when our spacecraft has a close encounter with comet Hartley 2."

The EPOXI mission's Nov. 4 encounter with Hartley 2 will be only the fifth time in history that a comet has been imaged close-up. At point of closest approach, the spacecraft will be about 700 kilometers (435 miles) from the comet.

"Hartley 2 better not blink, because we'll be screaming by at 12.3 kilometers per second (7.6 miles per second), said Larson.

For those interested in what the "T-minus" stands for in a NASA countdown to a rocket launch - it translates to "Time-minus." For example, when a rocket is getting ready for liftoff, it will be lifting off at a specific time. If that time is 45 seconds away, it is said to be "T-minus 45 seconds and counting."

EPOXI is an extended mission that utilizes the already "in-flight" Deep Impact spacecraft to explore distinct celestial targets of opportunity. The name EPOXI itself is a combination of the names for the two extended mission components: the extrasolar planet observations, called Extrasolar Planet Observations and Characterization (EPOCh), and the flyby of comet Hartley 2, called the Deep Impact Extended Investigation (DIXI). The spacecraft will continue to be referred to as "Deep Impact."