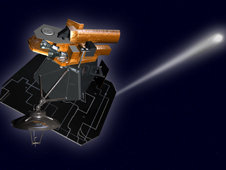 NASA's Deep Impact/EPOXI spacecraft flew past Earth on June 27, 2010, to get a boost from Earth’s gravity. It is now on its way to comet Hartley 2, depicted in this artist’s concept, with a planned flyby this fall. Image credit: NASA/JPL-Caltech
› Larger image

PASADENA, Calif. - Earlier today, navigators and mission controllers for NASA's EPOXI mission watched their computer screens as 23.6 million kilometers (14.7 million miles) away, their spacecraft successfully performed its 20th trajectory correction maneuver. The maneuver refined the spacecraft's orbit, setting the stage for its flyby of comet Hartley 2 on Nov. 4. Time of closest approach to the comet was expected to be about 10: 02 a.m. EDT (7:02 a.m. PDT).

"We are about 23 million miles and 36 days away from our comet," said EPOXI project manager Tim Larson of NASA's Jet Propulsion Laboratory in Pasadena, Calif. "I can't wait to see what Hartley 2 looks like."

"We are imaging the comet every day, and Hartley 2 is proving to be a worthy target for exploration," said Mike A'Hearn, EPOXI principal investigator from the University of Maryland, College Park.

EPOXI is an extended mission that utilizes the already "in flight" Deep Impact spacecraft to explore distinct celestial targets of opportunity. The name EPOXI itself is a combination of the names for the two extended mission components: the extrasolar planet observations, called Extrasolar Planet Observations and Characterization (EPOCh), and the flyby of comet Hartley 2, called the Deep Impact Extended Investigation (DIXI). The spacecraft will continue to be referred to as "Deep Impact."

For information about EPOXI, visit http://epoxi.umd.edu/.