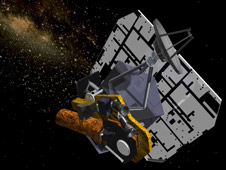 This is an artist concept of Epoxi, which uses the Deep Impact spacecraft. Image credit: Ball Aerospace
›  Full image and caption

PASADENA, Calif. - NASA's Deep Impact/Epoxi spacecraft has successfully performed a trajectory correction maneuver to refine its orbit prior to an upcoming Earth flyby June 27. The maneuver, along with the Earth flyby, will place the spacecraft on a trajectory to fly past comet Hartley 2 on Nov. 4.

The maneuver began at 2 p.m. EST (11 a.m. PST) today, when the spacecraft fired its engines for 11.3 seconds. While the burn changed the spacecraft's velocity by only 0.1 meters per second (less than a quarter mile per hour), that was all the mission's navigators requested to set the stage for an Earth gravity assist on June 27.

"While it was a small burn, it was a big step in getting us to Hartley 2," said Tim Larson, project manager of NASA's Epoxi mission. "Humanity's fifth close-up view of a comet is less than five months away."

Epoxi is an extended mission of the Deep Impact spacecraft. Its name is derived from its two tasked science investigations -- the Deep Impact Extended Investigation (DIXI) and the Extrasolar Planet Observation and Characterization (EPOCh).

For information about Epoxi, visit http://www.nasa.gov/epoxi .