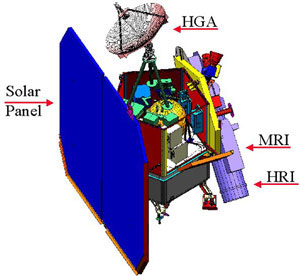 About the size of a Ford Explorer, the flyby spacecraft is three-axis stabilized and uses a fixed solar array and a small NiH2 battery for its power system. The structure is aluminum and aluminum honeycomb construction. Blankets, surface radiators, finishes, and heaters passively control the temperature. The propulsion system employs a simple blowdown hydrazine design that provides 190 m/s of delta V. The flyby spacecraft mass is 650 kg.

Debris shielding is a key part of the flyby S/C design. As the spacecraft passes through the inner coma of the comet it is in danger of being hit by small particles that could damage the control, imaging and communication systems. To minimize this potential damage the spacecraft is rotated before it passes through the inner coma allowing debris shielding to provide complete protection to the flyby spacecraft and instrument elements. 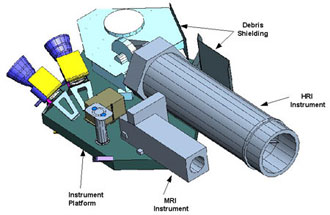