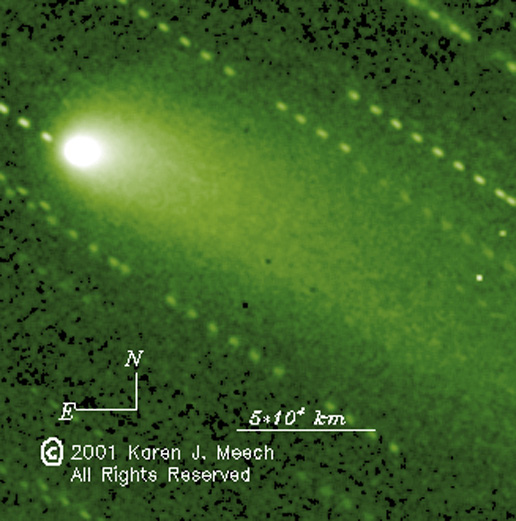 Comet Tempel 1 as it appeared on August 21, 2000, at a visible wavelength of 6500 Angstroms. The color scheme is false; least-to-most light is represented by green-to-white. This picture is the composite of 19 separate images of the comet, and since the comet moves across the sky with respect to the background stars, those stars appear as dotted lines. The image captures about 175,000 km of the sky at the distance of the comet. Most of the light we see here is sunlight reflected off of dust grains in the long, extended tail. At the time, the comet was ejecting several hundred kilograms of dust every second. The images were taken at the University of Hawaii's 2.2-m telescope (on Mauna Kea) using a Tektronix 2048 CCD by Drs. J. Pittichova and K. J. Meech.