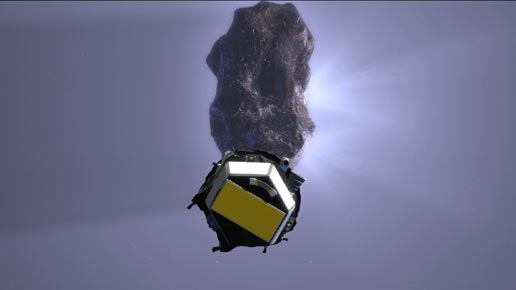 This animation shows a conceptualized view of Deep Impact's encounter with comet Tempel 1. Approximately 24 hours before impact, the flyby spacecraft releases the impactor into the comet's path. The impactor uses control software and thrusters to guide itself towards the nucleus of the comet. Using optical measurements, the impactor's AutoNav software will steer itself to the brightest object in its line of sight, the Sun-facing side of Tempel 1's nucleus.

During its final moments, the impactor will take the closest images of comet's surface ever. The kinetic energy that will be released by the collision is estimated to be the equivalent of nearly 5 tons of TNT. However, this will only change the comet's velocity by about 0.0001 millimeters per second (0.014 inches per hour). The collision will not appreciably modify the orbital path of Tempel 1, which poses no threat to Earth now or in the foreseeable future.

The resulting collision between comet and impactor will likely punch a crater, anywhere from the size of a Sport Utility Vehicle to a football stadium, into the comet's nucleus. Before, during and after impact, the flyby spacecraft wil be observing events from a safe distance, imaging the crater formation and resulting ejecta. The flyby will then turn away to protect itself from possible damage from the ejecta.