NASA's Deep Impact Adds Color to Unfolding Comet Picture
Painting by the numbers is a good description of how scientists create pictures of everything from atoms in our bodies to asteroids and comets in our solar system. Researchers involved in NASA's Deep Impact mission have been doing this kind of work since the mission's July 4th collision with comet Tempel 1.

"Prior to our Deep Impact experiment, scientists had a lot of questions and untested ideas about the structure and composition of the nucleus, or solid body of a comet, but we had almost no real knowledge," said Deep Impact principal investigator Dr. Michael A'Hearn, a professor of astronomy at the University of Maryland, College Park. "Our analysis of data produced by Deep Impact is revealing a great deal, much of it rather surprising." 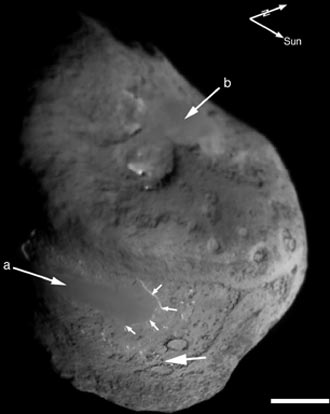 Image right: This composite image was built up from scaling all images to 5 meters/pixel, and aligning images to fixed points. Each image at closer range, replaced equivalent locations observed at a greater distance. The impact site has the highest resolution because images were acquired until about 4 sec from impact or a few meters from the surface.
+ Full image
+ Latest images

For example, comet Tempel 1 has a very fluffy structure that is weaker than a bank of powder snow. The fine dust of the comet is held together by gravity. However, that gravity is so weak, if you could stand on the bank and jump, you would launch yourself into space. Another surprise for A'Hearn and his colleagues was the evidence of what appears to be impact craters on the surface of the comet. Previously, two other comets had their nuclei closely observed and neither showed evidence of impact craters. "The nucleus of Tempel 1 has distinct layers shown in topographic relief ranging from very smooth areas to areas with features that satisfy all the criteria for impact craters, including varying size," A'Hearn said. "The problem in stating with certainty that these are impact craters is that we don't know of a mechanism by which some comets would collide with the flotsam and jetsam in our solar system, while others would not.”

According to A'Hearn, one of the more interesting findings may be the huge increase in carbon-containing molecules detected in spectral analysis of the ejection plume. This finding indicates comets contain a substantial amount of organic material, so they could have brought such material to Earth early in the planet's history when strikes by asteroids and meteors were common.

Another finding is the comet interior is well shielded from the solar heating experienced by the surface of the comet nucleus. Mission data indicate the nucleus of Tempel 1 is extremely porous. Its porosity allows the surface of the nucleus to heat up and cool down almost instantly in response to sunlight. This suggests heat is not easily conducted to the interior and the ice and other material deep inside the nucleus may be pristine and unchanged from the early days of the solar system, just as many scientists had suggested.

"The infrared spectrometer gave us the first temperature map of a comet, allowing us to measure the surface's thermal inertia, or ability to conduct heat to the interior," said Dr. Olivier Groussin, the University of Maryland research scientist who generated the map.

It is this diligent and time consuming analysis of spectral data that is providing much of the "color" with which Deep Impact scientists are painting the first ever detailed picture of a comet. For example, researchers recently saw emission bands for water vaporized by the heat of the impact, followed a few seconds later by absorption bands from ice particles ejected from below the surface and not melted or vaporized.

"In a couple of seconds the fast, hot moving plume containing water vapor left the view of the spectrometer, and we are suddenly seeing the excavation of sub-surface ice and dust," said Deep Impact co-investigator Dr. Jessica Sunshine, with Science Applications International Corporation, Chantilly, Va. "It is the most dramatic spectral change I've ever seen."

These findings are published in the September 9 issue of the journal Science, and were presented this week at the Division for Planetary Sciences meeting in Cambridge, England. Mission scientists are filling in important new portions of a cometary picture that is still far from finished.

The University of Maryland is responsible for overall Deep Impact mission science, and project management is handled by JPL. The spacecraft was built for NASA by Ball Aerospace & Technologies Corporation, Boulder, Colo. JPL is a division of the California Institute of Technology, Pasadena, Calif.

For more information about the Deep Impact mission on the Internet, visit: www.nasa.gov/deepimpact