"The time of comet encounter is near and the major mission milestones are getting closer and closer together," said Rick Grammier, Deep Impact project manager at NASA's Jet Propulsion Laboratory, Pasadena, Calif. "After all the years of design, training and simulations, we are where we want to be. The flight and science teams are working the mission plan, and we are good to go for encounter." 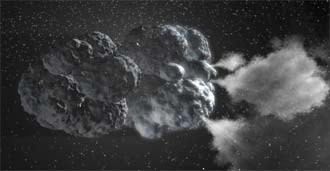 
Deep Impact consists of a subcompact-car-sized flyby spacecraft and an impactor, about the size of a washing machine. The dual spacecraft carry three imaging instruments, two on the flyby and one on the impactor.

Several major mission milestones occurred during the past week. The mission's third trajectory correction maneuver was successfully executed on June 23. The burn of the spacecraft's motors changed Deep Impact's speed by 13 miles per hour. Another trajectory correction for final targeting before impactor release is scheduled for 8:00 p.m. EDT July 2 (5:00 p.m. PDT).

Mission planners separated the spacecraft's flight operations into six mission phases. The phases are launch, commissioning, cruise, approach, encounter and playback. The five-day encounter phase incorporates the final approach to the comet and transmission to Earth of collected data.

"We've completed the final pre-release checkout of the impactor. The impactor probe will have a short, 24 hour life from release to impact, but an incredibly important role," said Dave Spencer, Deep Impact mission manager at JPL.

The impactor has an auto-navigation system that will make final corrections to its flight path just minutes before the scheduled collision. Scientists hope the resulting crater will expose fresh material from below the comet's surface and subsurface.

"That is the whole point of Deep Impact," said mission principal investigator and University of Maryland astronomer Dr. Michael A'Hearn. "We want to find out what are the guts of a comet."

The flyby spacecraft will use medium and high resolution imagers and an infrared spectrometer to collect and send to Earth pictures and spectra of the event. Spaceborne science platforms will also be watching Deep Impact. These include NASA's Hubble and Spitzer space telescopes, the Chandra X-ray Observatory, the Swift and Submillimeter Wave Astronomy satellites, the European Space Agency's XMM-Newton X-ray observatory and Rosetta spacecraft. Observatories on Earth will view the impact and its aftermath.

The final prelude to impact begins early on July 3 EDT (July 2 PDT), when the flyby spacecraft releases the impactor into the path of the onrushing comet. The release is scheduled at 1:52 a.m. EDT, 24 hours before impact (10:52 p.m. PDT).

The 820-pound impactor will collide with the comet's nucleus at a closing speed of 37,000 kilometers per hour (23,000 miles per hour). Scientists expect the impact to create a large crater. The impact will eject ice, dust and gas from the crater and reveal the pristine material beneath. The impact will have no significant effect on the comet's orbit, which poses no threat to Earth.

For information about Deep Impact on the Web, visit: