NASA Announces Spectacular Day of the Comet
After a voyage of 173 days and 431 million kilometers (268 million miles), NASA's Deep Impact spacecraft will get up-close and personal with comet Tempel 1 on July 4 (EDT).

The first of its kind, hyper-speed impact between space-borne iceberg and copper-fortified probe is scheduled for approximately 1:52 a.m. EDT on Independence Day (10:52 p.m. PDT on July 3). The potentially spectacular collision will be observed by the Deep Impact spacecraft, and ground and space-based observatories. 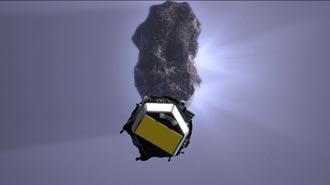 "We are really threading the needle with this one," said Rick Grammier, Deep Impact project manager at NASA’s Jet Propulsion Laboratory, Pasadena, Calif. "In our quest of a great scientific payoff, we are attempting something never done before at speeds and distances that are truly out of this world."

During the early morning hours of July 3 (EDT), the Deep Impact spacecraft will deploy a 1-meter-wide (39-inch-wide) impactor into the path of the comet, which is about half the size of Manhattan Island, N.Y. Over the next 22 hours, Deep Impact navigators and mission members located more than 133 million kilometers (83 million miles) away at JPL, will steer both spacecraft and impactor toward the comet. The impactor will head into the comet and the flyby craft will pass approximately 500 kilometers (310 miles) below.

Tempel 1 is hurtling through space at approximately 37,100 kilometers per hour (23,000 miles per hour or 6.3 miles per second). At that speed you could travel from New York to Los Angeles in less than 6.5 minutes. Two hours before impact, when mission events will be happening so fast and so far away, the impactor will kick into autonomous navigation mode. It must perform its own navigational solutions and thruster firings to make contact with the comet.

"The autonav is like having a little astronaut on board," Grammier said. "It has to navigate and fire thrusters three times to steer the wine cask-sized impactor into the mountain-sized comet nucleus closing at 23,000 miles per hour."

The crater produced by the impact could range in size from a large house up to a football stadium, and from two to 14 stories deep. Ice and dust debris will be ejected from the crater, revealing the material beneath. The flyby spacecraft has approximately 13 minutes to take images and spectra of the collision and its result before it must endure a potential blizzard of particles from the nucleus of the comet.

"The last 24 hours of the impactor's life should provide the most spectacular data in the history of cometary science," said Deep Impact Principal Investigator Dr. Michael A'Hearn of the University of Maryland, College Park. "With the information we receive after the impact, it will be a whole new ballgame. We know so little about the structure of cometary nuclei that almost every moment we expect to learn something new."

"In the world of science, this is the astronomical equivalent of a 767 airliner running into a mosquito," said Dr. Don Yeomans, a Deep Impact mission scientist at JPL. "The impact simply will not appreciably modify the comet's orbital path. Comet Tempel 1 poses no threat to the Earth now or in the foreseeable future."

Deep Impact will provide a glimpse beneath the surface of a comet, where material from the solar system's formation remains relatively unchanged. Mission scientists expect the project will answer basic questions about the formation of the solar system, by offering a better look at the nature and composition of the frozen celestial travelers we call comets.

The University of Maryland is responsible for overall Deep Impact mission management, and project management is handled by JPL. The spacecraft was built for NASA by Ball Aerospace & Technologies Corporation, Boulder, Colo.

For more information about Deep Impact on the Internet, visit: http://www.nasa.gov/deepimpact.

For information about NASA and agency programs on the Internet, visit: http://www.nasa.gov/home/index.html.