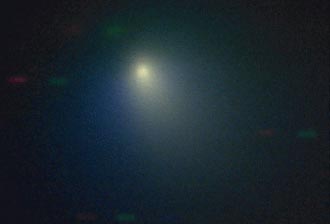 The burn further refined the spacecraft's trajectory, or flight path, and also moved forward the expected time of the Independence Day comet encounter so impact would be visible by ground- and space- based observatories.

The 95-second burn – the longest remaining firing of the spacecraft's motors prior to comet encounter -- was executed on May 4. It changed Deep Impact's speed by 18.2 kilometers per hour (11.3 miles per hour).

"Spacecraft performance has been excellent, and this burn was no different," said Rick Grammier, Deep Impact project manager at NASA's Jet Propulsion Laboratory, Pasadena, Calif. "It was a textbook maneuver that placed us right on the money."

Right on the money is where Deep Impact has to be to place a 1-meter- long (39-inch) impactor spacecraft in the path of a comet about as big as the island of Manhattan that is bearing down on it at 37,100 kilometers per hour (6.3 miles per second). At the same time, from a very comet-intimate distance of 500 kilometers (310 miles), a flyby spacecraft will be monitoring the event. This all occurs in the wee hours of July 4 – at 1:52 am Eastern time (July 3, 10:52 p.m. Pacific time) -- at a distance of 133.6-million kilometers (83- million miles) from Earth.

"With this maneuver our friends working the Hubble Space Telescope are assured a ringside seat," said Deep Impact Principal Investigator Dr. Michael A'Hearn of the University of Maryland, College Park. "Their observations, along with space telescopes Chandra and Spitzer and numerous ground-based observatories, will provide us with the most scientific bang for our buck with Deep Impact."

Deep Impact is comprised of two parts, a "flyby" spacecraft and a smaller "impactor." The impactor will be released into the comet's path before a planned high-speed collision on July 4. The crater produced by the impact could range in size from the width of a large house up to the size of a football stadium, and from 2 to 14 stories deep. Ice and dust debris will be ejected from the crater, revealing the material beneath.

The overall Deep Impact mission management for this Discovery class program is conducted by the University of Maryland in College Park, Md. Deep Impact project management is handled by JPL. The spacecraft was built for NASA by Ball Aerospace & Technologies Corporation, Boulder, Colo.