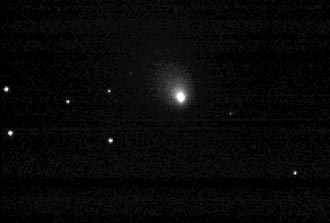 The image, the first of many comet portraits it will take over the next 10 weeks, will aid Deep Impact's navigators, engineers and scientists as they plot their final trajectory toward an Independence Day encounter.

"It is great to get a first glimpse at the comet from our spacecraft," said Deep Impact Principal Investigator Dr. Michael A'Hearn of the University of Maryland, College Park, Md. "With daily observations beginning in May, Tempel 1 will become noticeably more impressive as we continue to close the gap between spacecraft and comet. What is now little more than a few pixels across will evolve by July 4 into the best, most detailed images of a comet ever taken."

The ball of dirty ice and rock was detected on April 25 by Deep Impact's medium resolution instrument on the very first attempt. While making the detection, the spacecraft's camera saw stars as dim as 11th visual magnitude, more than 100 times dimmer than a human can see on a clear night.

"This is the first of literally thousands of images we will take of Tempel 1 for both science and navigational purposes," said Deputy Program Manager Keyur Patel at NASA's Jet Propulsion Laboratory, Pasadena, Calif. "Our goal is to impact a one-meter long (39-inch) spacecraft into about a 6.5-kilometer wide (4-mile) comet that is bearing down on it at 10.2 kilometers per second (6.3 miles per second), while both are 133.6 million kilometers (83 million miles) away from Earth. By finding the comet as early and as far away as we did is a definite aid to our navigation."

To view the comet image on the Internet, visit http://www.nasa.gov/deepimpact or http://deepimpact.jpl.nasa.gov/.

Deep Impact is comprised of two parts, a "flyby" spacecraft and a smaller "impactor." The impactor will be released into the comet's path for a planned high-speed collision on July 4. The crater produced by the impact could range in size from the width of a large house up to the size of a football stadium and from 2 to 14 stories deep. Ice and dust debris will be ejected from the crater, revealing the material beneath.

The Deep Impact spacecraft has four data collectors to observe the effects of the collision – a camera and infrared spectrometer comprise the high resolution instrument, a medium resolution instrument, and a duplicate of that camera on the impactor (called the impactor targeting sensor) that will record the vehicle's final moments before it is run over by comet Tempel 1 at a speed of about 37,000 kilometers per hour (23,000 miles per hour).

The overall Deep Impact mission management for this Discovery class program is conducted by the University of Maryland. Deep Impact project management is handled by the Jet Propulsion Laboratory. The spacecraft was built for NASA by Ball Aerospace & Technologies Corporation, Boulder, Colo.

For more information about Deep Impact on the Internet, visit http://deepimpact.jpl.nasa.gov/.

For more information about NASA on the Internet, visit: http://www.nasa.gov.