Deep Impact Mission Status
NASA's Deep Impact spacecraft has completed the commissioning phase of the mission and has moved into the cruise phase.

Deep Impact mission planners have separated the spacecraft's flight operations into five mission phases. Cruise phase will continue until about 60 days before the encounter with comet Tempel 1 on July 4, 2005. 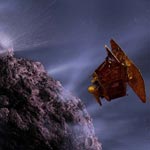 Soon after launch on Jan. 12, 2005, Deep Impact entered the commissioning phase. During that phase, the mission team verified the basic state of health of all subsystems and tested the operation of science instruments. The spacecraft's autonomous navigation system was activated and tested using the Moon and Jupiter as targets.

The spacecraft's high gain antenna, which will relay images and data of the cometary collision, was activated and is operating properly. A trajectory correction maneuver was performed, refining the spacecraft's flight path to comet Tempel 1. The maneuver was so successful that a second one planned for March 31 has been cancelled.

Another event during commissioning phase was the bake-out heating of the spacecraft's High Resolution Instrument to remove normal residual moisture from its barrel. The moisture was a result of absorption into the structure of the instrument during the vehicle's last hours on the launch pad and its transit through the atmosphere to space.

At completion of the bake-out procedure, test images were taken through the High Resolution Instrument. These images indicate the telescope has not reached perfect focus. A special team has been formed to investigate the performance and to evaluate activities to bring the telescope the rest of the way to focus. Future calibration tests will provide additional information about the instrument’s performance.

Dr. Michael A'Hearn of the University of Maryland, College Park, Md., added, "We are very early in the process of examining the data from all the instruments. It appears our infrared spectrometer is performing spectacularly, and even if the spatial resolution of the High Resolution Instrument remains at present levels, we still expect to obtain the best, most detailed pictures of a comet ever taken."

"This in no way will affect our ability to impact the comet on July 4," said Rick Grammier, Deep Impact project manager at NASA's Jet Propulsion Laboratory, Pasadena, Calif. "Everyone on the science and engineering teams is getting very excited and looking forward to the encounter."

Deep Impact is comprised of two parts, a flyby spacecraft and a smaller impactor. The impactor will be released into the comet's path for the planned high-speed collision. The crater produced by the impactor is expected to range from the width of a house up to the size of a football stadium and be from two to 14 stories deep. Ice and dust debris will be ejected from the crater revealing the material beneath.

Along with the imagers aboard Deep Impact, NASA's Hubble, Spitzer and Chandra space telescopes, along with the largest telescopes on Earth, will observe the effects of the material flying from the comet's newly formed crater.

An intimate glimpse beneath the surface of a comet, where material and debris from the formation of the solar system remain relatively unchanged, will answer basic questions about the how the solar system formed. The effects of the collision will offer a better look at the nature and composition of these celestial travelers.

For more information about Deep Impact on the Internet, visit http://www.nasa.gov/deepimpact.