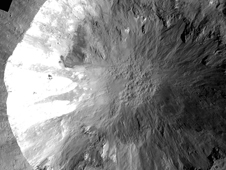 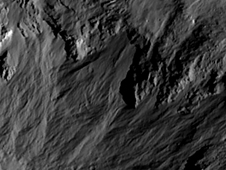 This image shows a close-up of long, narrow, sinuous gullies that scientists on NASA's Dawn mission have found on the giant asteroid Vesta. Image credit: NASA/JPL-Caltech/UCLA/MPS/DLR/IDA
› Full image and caption 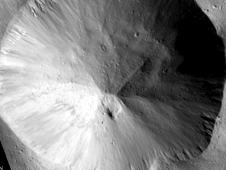 In a preliminary analysis of images from NASA's Dawn mission, scientists have spotted intriguing gullies that sculpt the walls of geologically young craters on the giant asteroid Vesta. Led by Jennifer Scully, a Dawn team member at the University of California, Los Angeles, these scientists have found narrow channels of two types in images from Dawn's framing camera - some that look like straight chutes and others that carve more sinuous trails and end in lobe-shaped deposits. The mystery, however, is what is creating them?

The presentation on gullies is one of several that Dawn team members are making at this year's American Geophysical Union conference in San Francisco. Other topics include craters on Vesta, the giant asteroid's mineralogy, and the distinctive dark and bright materials found on the surface.

"The straight gullies we see on Vesta are textbook examples of flows of dry material, like sand, that we've seen on Earth's moon and we expected to see on Vesta," said Scully, who presented in-progress findings on these gullies today. "But these sinuous gullies are an exciting, unexpected find that we are still trying to understand."

The sinuous gullies are longer, narrower, and curvier than the short, wide, straight gullies. They tend to start from V-shaped, collapsed regions described as "alcoves" and merge with other gullies. Scientists think different processes formed the two types of gullies and have been looking at images of Earth, Mars and other small bodies for clues.

"On Earth, similar features - seen at places like Meteor Crater in Arizona -- are carved by liquid water," said Christopher Russell, Dawn's principal investigator, also based at UCLA. "On Mars, there is still a debate about what has caused them. We need to analyze the Vesta gullies very carefully before definitively specifying their source."

Indeed, scientists have suggested various explanations for gullies on Mars since fresh-looking gullies were discovered in images from NASA's Mars Global Surveyor in 2000. Some of the proposed Martian mechanisms involve water, some carbon dioxide, and some neither. One study in 2010 suggested that carbon-dioxide frost was causing fresh flows of sand on the Red Planet.

JPL manages the Dawn mission for NASA's Science Mission Directorate in Washington. Dawn is a project of the directorate's Discovery Program, managed by NASA's Marshall Space Flight Center in Huntsville, Ala. The University of California at Los Angeles (UCLA) is responsible for overall Dawn mission science. Orbital Sciences Corp. in Dulles, Va., designed and built the spacecraft. The German Aerospace Center, the Max Planck Institute for Solar System Research, the Italian Space Agency and the Italian National Astrophysical Institute are international partners on the mission team. The California Institute of Technology in Pasadena manages JPL for NASA. For more information about Dawn, visit: http://www.nasa.gov/dawn and http://dawn.jpl.nasa.gov .