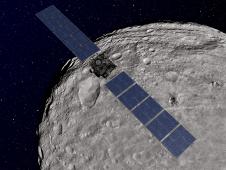 UPDATE (posted at 5:30 p.m. PDT on Aug. 15, 2012) : The Dawn flight team returned the spacecraft to its normal mode of operations on Tuesday, Aug. 14, and is revising the Vesta departure plan. Ion thrusting will resume on Friday, Aug. 17, and escape from Vesta is now expected to occur on Sept. 5. All of Dawn's reaction wheels remain powered off. The spacecraft will continue to use its attitude control thrusters for spacecraft pointing from now through the journey to Ceres. Arrival at Ceres is still expected to occur early in 2015. The reaction wheels will be exercised periodically during cruise.The Dawn team is identifying opportunities to do more troubleshooting on the wheel that developed excessive friction last week.

PASADENA, Calif. -- Engineers working on NASA’s Dawn spacecraft are assessing the status of a reaction wheel -- part of a system that helps the spacecraft point precisely -- after onboard software powered it off on Aug. 8. Dawn’s mission is to study the geology and geochemistry of the giant asteroid Vesta and dwarf planet Ceres, the two most massive objects in the main asteroid belt. Dawn is now using its thrusters to point at Earth for communications. The rest of the spacecraft is otherwise healthy.

During a planned communications pass on Aug. 9, the team learned that the reaction wheel had been powered off. Telemetry data from the spacecraft suggest the wheel developed excessive friction, similar to the experience with another Dawn reaction wheel in June 2010. The Dawn team demonstrated during the cruise to Vesta in 2011 that, if necessary, they could complete the cruise to Ceres without the use of reaction wheels.

The spacecraft has been orbiting Vesta since July 15, 2011. Dawn concluded its primary science observations of Vesta on July 25, 2012, and has been spiraling slowly away from the giant asteroid using its ion propulsion system. Ion thrusting was halted to accommodate the reaction wheel investigation, which may briefly delay the escape from Vesta.

"The Vesta mission has been spectacularly successful, and we are looking forward to the exciting Ceres mission ahead of us," said Robert Mase, Dawn project manager, of NASA's Jet Propulsion Laboratory, Pasadena, Calif.

JPL manages the Dawn mission for NASA's Science Mission Directorate in Washington. Dawn is a project of the directorate's Discovery Program, managed by NASA's Marshall Space Flight Center in Huntsville, Ala. The University of California at Los Angeles (UCLA) is responsible for overall Dawn mission science. Orbital Sciences Corp. in Dulles, Va., designed and built the spacecraft. The German Aerospace Center, the Max Planck Institute for Solar System Research, the Italian Space Agency and the Italian National Astrophysical Institute are international partners on the mission team.