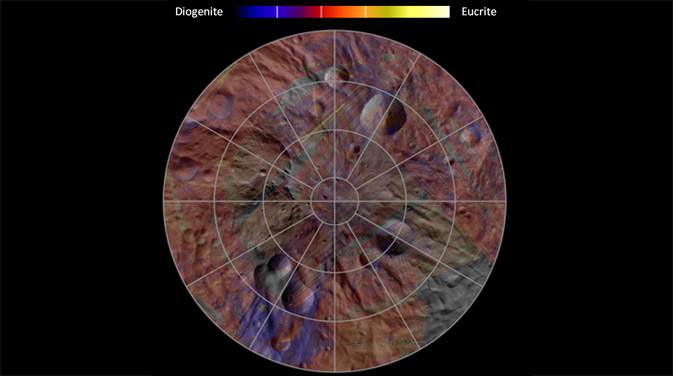 This image, made from data obtained by NASA's Dawn spacecraft, shows the mineral distribution in the southern hemisphere of the giant asteroid Vesta. Image credit: NASA/JPL-Caltech/UCLA/INAF/MPS/DLR/IDA
› Full image and caption       › Image gallery 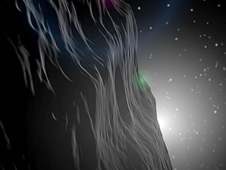 This movie uses data from NASA's Dawn spacecraft to simulate the view from the spacecraft flying over the surface of the giant asteroid Vesta.
› Virtual flight video
› Touring craters 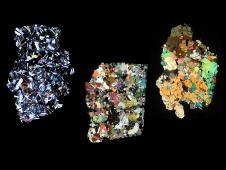 This image shows three slices of a class of meteorites that fell to Earth that NASA's Dawn mission has confirmed as originating from the giant asteroid Vesta. Image credit: University of Tennessee
› Full image and caption 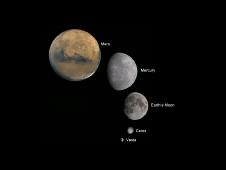 PASADENA, Calif. – NASA's Dawn spacecraft has provided researchers with the first orbital analysis of the giant asteroid Vesta, yielding new insights into its creation and kinship with terrestrial planets and Earth's moon.

Vesta now has been revealed as a special fossil of the early solar system with a more varied, diverse surface than originally thought. Scientists have confirmed a variety of ways in which Vesta more closely resembles a small planet or Earth's moon than another asteroid. Results appear in today's edition of the journal Science.

"Dawn's visit to Vesta has confirmed our broad theories of this giant asteroid's history, while helping to fill in details it would have been impossible to know from afar," said Carol Raymond, deputy principal investigator at NASA's Jet Propulsion Laboratory in Pasadena, Calif. "Dawn's residence at Vesta of nearly a year has made the asteroid's planet-like qualities obvious and shown us our connection to that bright orb in our night sky."

Scientists now see Vesta as a layered, planetary building block with an iron core – the only one known to survive the earliest days of the solar system. The asteroid's geologic complexity can be attributed to a process that separated the asteroid into a crust, mantle and iron core with a radius of approximately 68 miles (110 kilometers) about 4.56 billion years ago. The terrestrial planets and Earth's moon formed in a similar way.

Dawn observed a pattern of minerals exposed by deep gashes created by space rock impacts, which may support the idea the asteroid once had a subsurface magma ocean. A magma ocean occurs when a body undergoes almost complete melting, leading to layered building blocks that can form planets. Other bodies with magma oceans ended up becoming parts of Earth and other planets.

Data also confirm a distinct group of meteorites found on Earth did, as theorized, originate from Vesta. The signatures of pyroxene, an iron- and magnesium-rich mineral, in those meteorites match those of rocks on Vesta's surface. These objects account for about 6 percent of all meteorites seen falling on Earth.

This makes the asteroid one of the largest single sources for Earth's meteorites. The finding also marks the first time a spacecraft has been able to visit the source of samples after they were identified on Earth.

Scientists now know Vesta's topography is quite steep and varied. Some craters on Vesta formed on very steep slopes and have nearly vertical sides, with landslides occurring more frequently than expected.

Another unexpected finding was that the asteroid's central peak in the Rheasilvia basin in the southern hemisphere is much higher and wider, relative to its crater size, than the central peaks of craters on bodies like our moon. Vesta also bears similarities to other low-gravity worlds like Saturn's small icy moons, and its surface has light and dark markings that don't match the predictable patterns on Earth's moon.

"We know a lot about the moon and we're only coming up to speed now on Vesta," said Vishnu Reddy, a framing camera team member at the Max Planck Institute for Solar System Research in Germany and the University of North Dakota in Grand Forks. "Comparing the two gives us two storylines for how these fraternal twins evolved in the early solar system."

Dawn has revealed details of ongoing collisions that battered Vesta throughout its history. Dawn scientists now can date the two giant impacts that pounded Vesta's southern hemisphere and created the basin Veneneia approximately 2 billion years ago and the Rheasilvia basin about 1 billion years ago. Rheasilvia is the largest impact basin on Vesta.

"The large impact basins on the moon are all quite old," said David O'Brien, a Dawn participating scientist from the Planetary Science Institute in Tucson, Ariz. "The fact that the largest impact on Vesta is so young was surprising."

Launched in 2007, Dawn began exploring Vesta in mid-2011. The spacecraft will depart Vesta on August 26 for its next study target, the dwarf planet Ceres, in 2015.

Dawn's mission to Vesta and Ceres is managed by JPL for NASA's Science Mission Directorate in Washington. Dawn is a project of the directorate's Discovery Program managed by NASA's Marshall Space Flight Center in Huntsville, Ala. UCLA is responsible for overall Dawn mission science. Orbital Sciences Corp. in Dulles, Va., designed and built the spacecraft. The German Aerospace Center, the Max Planck Institute for Solar System Research, the Italian Space Agency and the Italian National Astrophysical Institute are international partners on the mission team. The California Institute of Technology in Pasadena manages JPL for NASA.