These composite images from the framing camera aboard NASA’s Dawn spacecraft show three views of a terrain with ridges and grooves near Aquilia crater in the southern hemisphere of the giant asteroid Vesta. Image credit: NASA/JPL-Caltech/UCLA/MPS/DLR/IDA › Full image and caption       › View animation 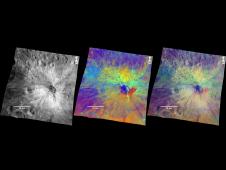 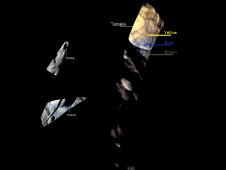 These images of Tarpeia crater, near the south pole of the giant asteroid Vesta, were obtained by the visible and infrared mapping spectrometer on NASA’s Dawn spacecraft. Image credit: NASA/JPL-Caltech/UCLA/INAF
› Full image and caption 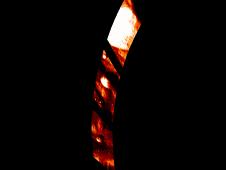 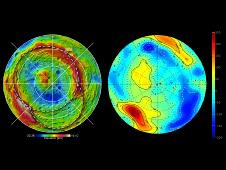 This set of images from NASA's Dawn mission shows topography of the southern hemisphere of the giant asteroid Vesta and a map of Vesta’s gravity variations that have been adjusted to account for Vesta’s shape. Image credit: NASA/JPL-Caltech/UCLA/MPS/DLR/IDA
› Full image and caption

PASADENA, Calif. – Findings from NASA's Dawn spacecraft reveal new details about the giant asteroid Vesta, including its varied surface composition, sharp temperature changes and clues to its internal structure. The findings were presented today at the European Geosciences Union meeting in Vienna, Austria, and will help scientists better understand the early solar system and processes that dominated its formation.

Images from Dawn's framing camera and visible and infrared mapping spectrometer, taken 420 miles (680 kilometers) and 130 miles (210 kilometers) above the surface of the asteroid, show a variety of surface mineral and rock patterns. Coded false-color images help scientists better understand Vesta's composition and enable them to identify material that was once molten below the asteroid's surface.

Researchers also see breccias, which are rocks fused during impacts from space debris. Many of the materials seen by Dawn are composed of iron- and magnesium-rich minerals, which often are found in Earth's volcanic rocks. Images also reveal smooth pond-like deposits, which might have formed as fine dust created during impacts settled into low regions.

"Dawn now enables us to study the variety of rock mixtures making up Vesta's surface in great detail," said Harald Hiesinger, a Dawn participating scientist at Münster University in Germany. "The images suggest an amazing variety of processes that paint Vesta's surface."

At the Tarpeia crater near the south pole of the asteroid, Dawn imagery revealed bands of minerals that appear as brilliant layers on the crater's steep slopes. The exposed layering allows scientists to see farther back into the geological history of the giant asteroid.

The layers closer to the asteroid's surface bear evidence of contamination from space rocks bombarding Vesta. Layers below preserve more of their original characteristics. Frequent landslides on the slopes of the craters also have revealed other hidden mineral patterns.

"These results from Dawn suggest Vesta's 'skin' is constantly renewing," said Maria Cristina De Sanctis, lead of the visible and infrared mapping spectrometer team based at Italy's National Institute for Astrophysics in Rome.

Dawn has given scientists a near 3-D view into Vesta's internal structure. By making ultra-sensitive measurements of the asteroid's gravitational tug on the spacecraft, Dawn can detect unusual densities within its outer layers. Data now show an anomalous area near Vesta's south pole, suggesting denser material from a lower layer of Vesta has been exposed by the impact that created a feature called the Rheasilvia basin. The lighter, younger layers coating other parts of Vesta's surface have been blasted away in the basin.

"After more than nine months at Vesta, Dawn's suite of instruments has enabled us to peel back the layers of mystery that have surrounded this giant asteroid since humankind first saw it as just a bright spot in the night sky," said Carol Raymond, Dawn deputy principal investigator at NASA's Jet Propulsion Laboratory in Pasadena, Calif. "We are closing in on the giant asteroid's secrets."

Launched in 2007, Dawn began its exploration of the approximately 330-mile-wide (530-kilometers) asteroid in mid-2011. The spacecraft's next assignment will be to study the dwarf planet Ceres in 2015. These two icons of the asteroid belt have been witness to much of our solar system's history.

Dawn's mission is managed by JPL for NASA's Science Mission Directorate in Washington. Dawn is a project of the directorate's Discovery Program, managed by NASA's Marshall Space Flight Center in Huntsville, Ala. UCLA is responsible for overall Dawn mission science. Orbital Sciences Corp. in Dulles, Va., designed and built the spacecraft. The German Aerospace Center, the Max Planck Institute for Solar System Research, the Italian Space Agency and the Italian National Astrophysical Institute are international partners on the mission team. The California Institute of Technology in Pasadena manages JPL for NASA.

To view the new images and for more information about Dawn, visit: http://www.nasa.gov/dawn and http://dawn.jpl.nasa.gov .