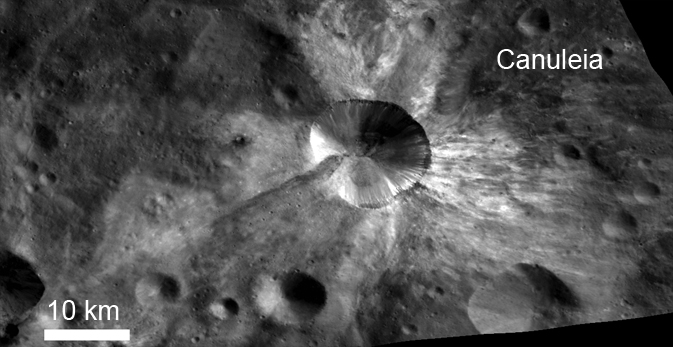 In this image from NASA's Dawn spacecraft, bright material extends out from the crater Canuleia on Vesta. The bright material appears to have been thrown out of the crater during the impact that created it. Image credit: NASA/JPL-Caltech/UCLA/MPS/DLR/IDA/UMD › Full image and caption       › Image gallery 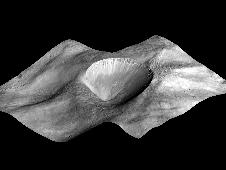 This image, made from data obtained by NASA's Dawn spacecraft, shows a perspective view of a layered young crater in the Rheasilvia basin at Vesta. Image credit: NASA/JPL-Caltech/UCLA/MPS/DLR/IDA/PSI
› Full image and caption 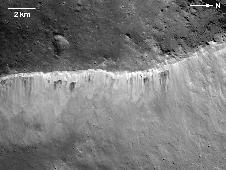 The interplay of bright and dark material at the rim of Marcia crater on Vesta is visible in this image mosaic taken by NASA's Dawn spacecraft. Image credit: NASA/JPL-Caltech/UCLA/MPS/DLR/IDA/LPI/ASU
› Full image and caption 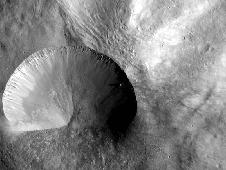 This image from NASA's Dawn spacecraft shows a young crater on Vesta that is 9 miles (15 kilometers) in diameter. Image credit: NASA/JPL-Caltech/UCLA/MPS/DLR/IDA
› Full image and caption

PASADENA, Calif. – NASA's Dawn spacecraft has revealed unexpected details on the surface of the giant asteroid Vesta. New images and data highlight the diversity of Vesta's surface and reveal unusual geologic features, some of which were never previously seen on asteroids.

These results were discussed today at the Lunar and Planetary Science Conference at The Woodlands, Texas.

Vesta is one of the brightest objects in the solar system and the only asteroid in the so-called main belt between Mars and Jupiter visible to the naked eye from Earth. Dawn has found that some areas on Vesta can be nearly twice as bright as others, revealing clues about the asteroid's history.

"Our analysis finds this bright material originates from Vesta and has undergone little change since the formation of Vesta over 4 billion years ago," said Jian-Yang Li, a Dawn participating scientist at the University of Maryland, College Park. "We're eager to learn more about what minerals make up this material and how the present Vesta surface came to be."

Bright areas appear everywhere on Vesta but are most predominant in and around craters. The areas vary from several hundred feet to around 10 miles (16 kilometers) across. Rocks crashing into the surface of Vesta seem to have exposed and spread this bright material. This impact process may have mixed the bright material with darker surface material.

While scientists had seen some brightness variations in previous images of Vesta from NASA's Hubble Space Telescope, Dawn scientists also did not expect such a wide variety of distinct dark deposits across its surface. The dark materials on Vesta can appear dark gray, brown and red. They sometimes appear as small, well-defined deposits around impact craters. They also can appear as larger regional deposits, like those surrounding the impact craters scientists have nicknamed the "snowman."

"One of the surprises was the dark material is not randomly distributed," said David Williams, a Dawn participating scientist at Arizona State University, Tempe. "This suggests underlying geology determines where it occurs."

The dark materials seem to be related to impacts and their aftermath. Scientists theorize carbon-rich asteroids could have hit Vesta at speeds low enough to produce some of the smaller deposits without blasting away the surface.

Higher-speed asteroids also could have hit Vesta's surface and melted the volcanic basaltic crust, darkening existing surface material. That melted conglomeration appears in the walls and floors of impact craters, on hills and ridges, and underneath brighter, more recent material called ejecta, which is material thrown out from a space rock impact.

Vesta's dark materials suggest the giant asteroid may preserve ancient materials from the asteroid belt and beyond, possibly from the birth of the solar system.

"Some of these past collisions were so intense they melted the surface," said Brett Denevi, a Dawn participating scientist at the Johns Hopkins University Applied Physics Laboratory in Laurel, Md. "Dawn's ability to image the melt marks a unique find. Melting events like these were suspected, but never before seen on an asteroid."

Dawn launched in September 2007. It will reach its second destination, Ceres, in February 2015.

"Dawn's ambitious exploration of Vesta has been going beautifully," said Marc Rayman, Dawn chief engineer at NASA's Jet Propulsion Laboratory in Pasadena, Calif. "As we continue to gather a bounty of data, it is thrilling to reveal fascinating alien landscapes."

Dawn's mission is managed by JPL for NASA's Science Mission Directorate in Washington. Dawn is a project of the directorate's Discovery Program, managed by NASA's Marshall Space Flight Center in Huntsville, Ala. UCLA is responsible for overall Dawn mission science. Orbital Sciences Corp. in Dulles, Va., designed and built the spacecraft. The German Aerospace Center, the Max Planck Institute for Solar System Research, the Italian Space Agency and the Italian National Astrophysical Institute are international partners on the mission team. JPL is managed for NASA by the California Institute of Technology in Pasadena.