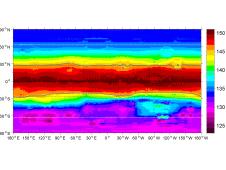 As this global map of average surface temperature shows, the warmer equatorial zone of the giant asteroid Vesta is likely too warm to sustain water ice below the surface. Image credit: NASA/GSFC/UMBC
› Full image and caption 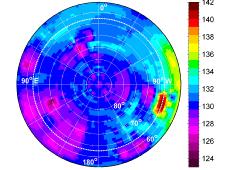 New modeling shows that, under present conditions, Vesta's polar regions are cold enough (less than about 145 kelvins) to sustain water ice for billions of years, as this map of average surface temperature around the asteroid's south pole indicates. Image credit: NASA/GSFC/UMBC
› Full image and caption

Though generally thought to be quite dry, roughly half of the giant asteroid Vesta is expected to be so cold and to receive so little sunlight that water ice could have survived there for billions of years, according to the first published models of Vesta's average global temperatures and illumination by the sun.

"Near the north and south poles, the conditions appear to be favorable for water ice to exist beneath the surface," says Timothy Stubbs of NASA's Goddard Space Flight Center in Greenbelt, Md., and the University of Maryland, Baltimore County. Stubbs and Yongli Wang of the Goddard Planetary Heliophysics Institute at the University of Maryland published the models in the January 2012 issue of the journal Icarus. The models are based on information from telescopes including NASA's Hubble Space Telescope.

Vesta, the second-most massive object in the asteroid belt between Mars and Jupiter, probably does not have any significant permanently shadowed craters where water ice could stay frozen on the surface all the time, not even in the roughly 300-mile-diameter (480-kilometer-diameter) crater near the south pole, the authors note. The asteroid isn't a good candidate for permanent shadowing because it is tilted on its axis at about 27 degrees, which is even greater than Earth's tilt of roughly 23 degrees. In contrast, the moon, which does have permanently shadowed craters, is tilted at only about 1.5 degrees. As a result of its large tilt, Vesta has seasons, and every part of the surface is expected to see the sun at some point during Vesta's year.

The presence or absence of water ice on Vesta tells scientists something about the tiny world's formation and evolution, its history of bombardment by comets and other objects, and its interaction with the space environment. Because similar processes are common to many other planetary bodies, including the moon, Mercury and other asteroids, learning more about these processes has fundamental implications for our understanding of the solar system as a whole. This kind of water ice is also potentially valuable as a resource for further exploration of the solar system.

Though temperatures on Vesta fluctuate during the year, the model predicts that the average annual temperature near Vesta's north and south poles is less than roughly minus 200 degrees Fahrenheit (145 kelvins). That is the critical average temperature below which water ice is thought to be able to survive in the top 10 feet or so (few meters) of the soil, which is called regolith.

Near Vesta's equator, however, the average yearly temperature is roughly minus 190 degrees Fahrenheit (150 kelvins), according to the new results. Based on previous modeling, that is expected to be high enough to prevent water from remaining within a few meters of the surface. This band of relatively warm temperatures extends from the equator to about 27 degrees north and south in latitude.

"On average, it's colder at Vesta's poles than near its equator, so in that sense, they are good places to sustain water ice," says Stubbs. "But they also see sunlight for long periods of time during the summer seasons, which isn't so good for sustaining ice. So if water ice exists in those regions, it may be buried beneath a relatively deep layer of dry regolith."

The modeling also indicates that relatively small surface features, such as craters measuring around 6 miles (10 kilometers) in diameter, could significantly affect the survival of water ice. "The bottoms of some craters could be cold enough on average -- about 100 kelvins -- for water to be able to survive on the surface for much of the Vestan year [about 3.6 years on Earth]," Stubbs explains. "Although, at some point during the summer, enough sunlight would shine in to make the water leave the surface and either be lost or perhaps redeposit somewhere else."

So far, Earth-based observations suggest that the surface of Vesta is quite dry. However, the Dawn spacecraft is getting a much closer view. Dawn is investigating the role of water in the evolution of planets by studying Vesta and Ceres, two bodies in the asteroid belt that are considered remnant protoplanets – baby planets whose growth was interrupted when Jupiter formed.

"Our perceptions of Vesta have been transformed in a few months as the Dawn spacecraft has entered orbit and spiraled closer to its surface," says Lucy McFadden, a planetary scientist at NASA Goddard and a Dawn mission co-investigator. "More importantly, our new views of Vesta tell us about the early processes of solar system formation. If we can detect evidence for water beneath the surface, the next question will be is it very old or very young, and that would be exciting to ponder."

The modeling done by Stubbs and Wang, for example, relies on information about Vesta's shape. Before Dawn, the best source of that information was a set of images taken by NASA's Hubble Space Telescope in 1994 and 1996. But now, Dawn and its camera are getting a much closer view of Vesta.

"The Dawn mission gives researchers a rare opportunity to observe Vesta for an extended period of time, the equivalent of about one season on Vesta," says Stubbs. "Hopefully, we'll know in the next few months whether the GRaND spectrometer sees evidence for water ice in Vesta's regolith. This is an important and exciting time in planetary exploration."

Dawn's mission to Vesta and Ceres is managed by NASA's Jet Propulsion Laboratory, Pasadena, Calif., for NASA's Science Mission Directorate in Washington. JPL is a division of the California Institute of Technology in Pasadena. Dawn is a project of the directorate's Discovery Program, managed by NASA's Marshall Space Flight Center in Huntsville, Ala. UCLA is responsible for overall Dawn mission science. Orbital Sciences Corp. in Dulles, Va., designed and built the spacecraft. The German Aerospace Center, the Max Planck Institute for Solar System Research, the Italian Space Agency and the Italian National Astrophysical Institute are international partners on the mission team. The asteroid modeling by Stubbs and Wang is an extension of analysis originally applied to the moon and partially funded by the NASA Lunar Science Institute.