NASA's Dawn spacecraft has spiraled closer and closer to the surface of the giant asteroid Vesta. Image credit: NASA/JPL-Caltech/UCLA/MPS/DLR/IDA › Full image and caption 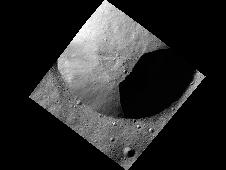 This image, one of the first obtained by NASA's Dawn spacecraft in its low altitude mapping orbit, shows an area within the Rheasilvia basin in the south polar area of the giant asteroid Vesta. Image credit: NASA/ JPL-Caltech/ UCLA/ MPS/ DLR/ IDA
› Full image and caption
› Image gallery 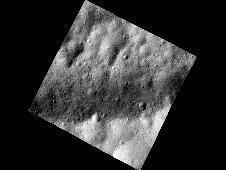 This image, one of the first obtained by NASA's Dawn spacecraft in its low altitude mapping orbit, shows a part of one of the troughs at the equator of the giant asteroid Vesta. Image credit: NASA/ JPL-Caltech/ UCLA/ MPS/ DLR/ IDA
› Full image and caption

PASADENA, Calif. – NASA's Dawn spacecraft has sent back the first images of the giant asteroid Vesta from its low-altitude mapping orbit. The images, obtained by the framing camera, show the stippled and lumpy surface in detail never seen before, piquing the curiosity of scientists who are studying Vesta for clues about the solar system's early history.

At this detailed resolution, the surface shows abundant small craters, and textures such as small grooves and lineaments that are reminiscent of the structures seen in low-resolution data from the higher-altitude orbits. Also, this fine scale highlights small outcrops of bright and dark material.

A gallery of images can be found online at: http://www.nasa.gov/mission_pages/dawn/multimedia/gallery-index.html .

The images were returned to Earth on Dec. 13. Dawn scientists plan to acquire data in the low-altitude mapping orbit for at least 10 weeks. The primary science objectives in this orbit are to learn about the elemental composition of Vesta's surface with the gamma ray and neutron detector and to probe the interior structure of the asteroid by measuring the gravity field.