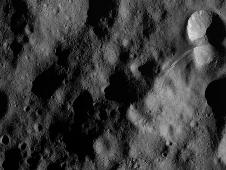 PASADENA, Calif. – NASA's Dawn spacecraft successfully maneuvered into its closest orbit around the giant asteroid Vesta today, beginning a new phase of science observations. The spacecraft is now circling Vesta at an altitude averaging about 130 miles (210 kilometers) in the phase of the mission known as low altitude mapping orbit.

"Dawn has performed some complicated and beautiful choreography in order to reach this lowest orbit," said Marc Rayman, Dawn chief engineer and mission manager based at NASA's Jet Propulsion Laboratory, Pasadena, Calif. "We are in an excellent position to learn much more about the secrets of Vesta's surface and interior."

Launched in 2007, Dawn has been in orbit around Vesta, the second most massive object in the asteroid belt between Mars and Jupiter, since July 15. The team plans to acquire data in the low orbit for at least 10 weeks.

Dawn's framing camera and visible and infrared mapping spectrometer instruments will image portions of the surface at greater resolution than obtained at higher altitudes. But the primary goal of the low orbit is to collect data for the gamma ray and neutron detector (GRaND) and the gravity experiment. GRaND will be looking for the by-products of cosmic rays reflected off Vesta to reveal the identities of many kinds of atoms in the surface of Vesta. The instrument is most effective at this low altitude.

Close proximity to Vesta also enables ultrasensitive measurements of its gravitational field. These measurements will tell scientists about the way masses are arranged in the giant asteroid's interior.

"Dawn's visit to Vesta has been eye-opening so far, showing us troughs and peaks that telescopes only hinted at," said Christopher Russell, Dawn's principal investigator, based at UCLA. "It whets the appetite for a day when human explorers can see the wonders of asteroids for themselves."

After the science collection is complete at the low altitude mapping orbit, Dawn will spiral out and conduct another science campaign at the high altitude mapping orbit altitude (420 miles, or 680 kilometers), when the sun will have risen higher in the northern regions. Dawn plans to leave Vesta in July 2012 and arrive at its second destination, the dwarf planet Ceres, in February 2015.