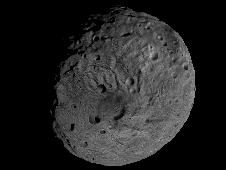 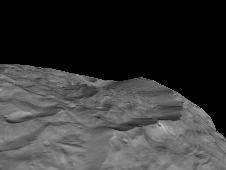 PASADENA, Calif. – A new video from NASA's Dawn spacecraft takes us on a flyover journey above the surface of the giant asteroid Vesta.

The data obtained by Dawn's framing camera, used to produce the visualizations, will help scientists determine the processes that formed Vesta's striking features. It will also help Dawn mission fans all over the world visualize this mysterious world, which is the second most massive object in the main asteroid belt.

The video, which shows Vesta as seen from Dawn's perspective, can be viewed at: http://www.jpl.nasa.gov/video/index.cfm?id=1020 .

You'll notice in the video that Vesta is not entirely lit up. There is no light in the high northern latitudes because, like Earth, Vesta has seasons. Currently it is northern winter on Vesta, and the northern polar region is in perpetual darkness. When we view Vesta's rotation from above the south pole, half is in darkness simply because half of Vesta is in daylight and half is in the darkness of night .

Another distinct feature seen in the video is a massive circular structure in the south pole region. Scientists were particularly eager to see this area close-up, since NASA's Hubble Space Telescope first detected it years ago. The circular structure, or depression, is several hundreds of miles, or kilometers, wide, with cliffs that are also several miles high. One impressive mountain in the center of the depression rises approximately 9 miles (15 kilometers) above the base of this depression, making it one of the highest elevations on all known bodies with solid surfaces in the solar system.

The collection of images, obtained when Dawn was about 1,700 miles (2,700 kilometers) above Vesta's surface, was used to determine its rotational axis and a system of latitude and longitude coordinates. One of the first tasks tackled by the Dawn science team was to determine the precise orientation of Vesta's rotation axis relative to the celestial sphere.

The zero-longitude, or prime meridian, of Vesta was defined by the science team using a tiny crater about 1,640 feet (500 meters) in diameter, which they named "Claudia," after a Roman woman during the second century B.C. Dawn's craters will be named after the vestal virgins—the priestesses of the goddess Vesta, and famous Roman women, while other features will be named for festivals and towns of that era.