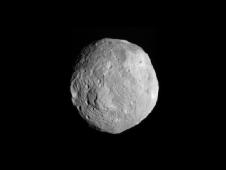 PASADENA, Calif. -- On July 15, NASA's Dawn spacecraft will begin a prolonged encounter with the asteroid Vesta, making the mission the first to enter orbit around a main-belt asteroid.

The main asteroid belt lies between the orbits of Mars and Jupiter. Dawn will study Vesta for one year, and observations will help scientists understand the earliest chapter of our solar system's history.

As the spacecraft approaches Vesta, surface details are coming into focus, as seen in a recent image taken from a distance of about 26,000 miles (41,000 kilometers). The image is available at: http://www.nasa.gov/mission_pages/dawn/multimedia/dawn-image-070911.html .

"It has taken nearly four years to get to this point," said Robert Mase, Dawn project manager at NASA's Jet Propulsion Laboratory in Pasadena, Calif. "Our latest tests and check-outs show that Dawn is right on target and performing normally."

Engineers have been subtly shaping Dawn's trajectory for years to match Vesta's orbit around the sun. Unlike other missions, where dramatic propulsive burns put spacecraft into orbit around a planet, Dawn will ease up next to Vesta. Then the asteroid's gravity will capture the spacecraft into orbit. However, until Dawn nears Vesta and makes accurate measurements, the asteroid's mass and gravity will only be estimates. So the Dawn team will need a few days to refine the exact moment of orbit capture.

Launched in September 2007, Dawn will depart for its second destination, the dwarf planet Ceres, in July 2012. The spacecraft will be the first to orbit two solar system destinations beyond Earth.

Dawn's mission to Vesta and Ceres is managed by JPL for NASA's Science Mission Directorate in Washington. Dawn is a project of the directorate's Discovery Program, which is managed by NASA's Marshall Space Flight Center in Huntsville, Ala. UCLA is responsible for overall Dawn mission science. Orbital Sciences Corp. of Dulles, Va., designed and built the spacecraft. The German Aerospace Center, the Max Planck Institute for Solar System Research, the Italian Space Agency and the Italian National Astrophysical Institute are part of the mission team.

For a current image of Vesta and more information about the Dawn mission, visit: http://www.nasa.gov/dawn and http://dawn.jpl.nasa.gov .You also can follow the mission on Twitter at: http://www.twitter.com/nasa_dawn .