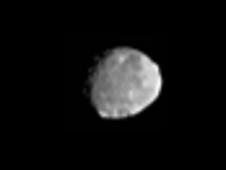 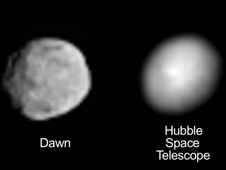 These views of the protoplanet Vesta were obtained by NASA's Dawn spacecraft and NASA's Hubble Space Telescope. Image credit: NASA/JPL-Caltech/UCLA/MPS/DLR/PSI and NASA/ESA/STScI/UMd
› Full image and caption
› Animation of Dawn's visit to Vesta 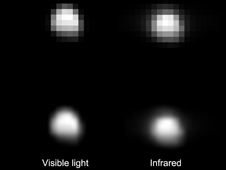 PASADENA, Calif. – NASA's Dawn spacecraft is on track to begin the first extended visit to a large asteroid. The mission expects to go into orbit around Vesta on July 16 and begin gathering science data in early August. Vesta resides in the main asteroid belt and is thought to be the source of a large number of meteorites that fall to Earth.

After Dawn enters Vesta's orbit, engineers will need a few days to determine the exact time of capture. Unlike other missions where a dramatic, nail-biting propulsive burn results in orbit insertion around a planet, Dawn has been using its placid ion propulsion system to subtly shape its path for years to match Vesta's orbit around the sun.

Images from Dawn's framing camera, taken for navigation purposes, show the slow progress toward Vesta. They also show Vesta rotating about 65 degrees in the field of view. The images are about twice as sharp as the best images of Vesta from NASA's Hubble Space Telescope, but the surface details Dawn will obtain are still a mystery.

"Navigation images from Dawn's framing camera have given us intriguing hints of Vesta, but we're looking forward to the heart of Vesta operations, when we begin officially collecting science data," said Christopher Russell, Dawn principal investigator, at UCLA. "We can't wait for Dawn to peel back the layers of time and reveal the early history of our solar system."

Dawn's three instruments are all functioning and appear to be properly calibrated. The visible and infrared mapping spectrometer, for example, has started to obtain images of Vesta that are larger than a few pixels in size. During the initial reconnaissance orbit, at approximately 1,700 miles (2,700 kilometers), the spacecraft will get a broad overview of Vesta with color pictures and data in different wavelengths of reflected light. The spacecraft will move into a high-altitude mapping orbit, about 420 miles (680 kilometers) above the surface to systematically map the parts of Vesta's surface illuminated by the sun; collect stereo images to see topographic highs and lows; acquire higher-resolution data to map rock types at the surface; and learn more about Vesta's thermal properties.

Dawn then will move even closer, to a low-altitude mapping orbit approximately 120 miles (200 kilometers) above the surface. The primary science goals of this orbit are to detect the byproducts of cosmic rays hitting the surface and help scientists determine the many kinds of atoms there, and probe the protoplanet's internal structure. As Dawn spirals away from Vesta, it will pause again at the high-altitude mapping orbit. Because the sun's angle on the surface will have progressed, scientists will be able to see previously hidden terrain while obtaining different views of surface features.

"We've packed our year at Vesta chock-full of science observations to help us unravel the mysteries of Vesta," said Carol Raymond, Dawn's deputy principal investigator at JPL. Vesta is considered a protoplanet, or body that never quite became a full-fledged planet.

Dawn launched in September 2007. Following a year at Vesta, the spacecraft will depart for its second destination, the dwarf planet Ceres, in July 2012. Dawn's mission to Vesta and Ceres is managed by JPL for NASA's Science Mission Directorate in Washington. Dawn is a project of the directorate's Discovery Program, managed by NASA's Marshall Space Flight Center in Huntsville, Ala.

UCLA is responsible for overall Dawn mission science. Orbital Sciences Corp. of Dulles, Va., designed and built the spacecraft. The German Aerospace Center, the Max Planck Institute for Solar System Research, the Italian Space Agency and the Italian National Astrophysical Institute are part of the mission team. JPL is managed for NASA by the California Institute of Technology in Pasadena. For more information about Dawn, visit: http://www.nasa.gov/dawn and http://dawn.jpl.nasa.gov . You can also follow the mission on Twitter at: http://www.twitter.com/NASA_Dawn .