This video shows the scientists' best guess to date of what the surface of the protoplanet Vesta might look like. It was created as part of an exercise for NASA's Dawn mission involving mission planners at NASA's Jet Propulsion Laboratory and science team members at the German Aerospace Center and the Planetary Science Institute. Image credit: NASA/JPL-Caltech/ESA/UCLA/DLR/PSI/STScI/UMd › Download video 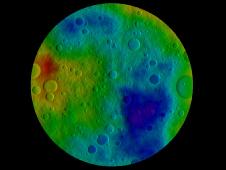 This image shows the scientists' best guess to date of what the surface of the protoplanet Vesta might look like from the south pole, as projected onto a sphere 250 kilometers (160 miles) in radius. Image credit: NASA/JPL-Caltech/UCLA/PSI
› Full image and caption 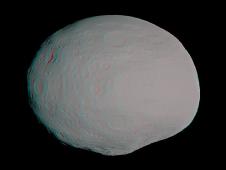 This anaglyph -- best viewed through red-blue glasses -- shows a 3-D model of the protoplanet Vesta, using scientists' best guess to date of what the surface of the protoplanet might look like. Image credit: NASA/JPL-Caltech/UCLA/PSI
› Full image and caption
› 2-D version

There is an old chestnut about a pedestrian who once asked a virtuoso violinist near Carnegie Hall how to get to the famed concert venue. The virtuoso's answer: practice!

The same applies to NASA's Dawn mission to the giant asteroid Vesta. In the lead-up to orbiting the second most massive body in the asteroid belt this coming July, Dawn mission planners and scientists have been practicing mapping Vesta's surface, producing still images and a rotating animation that includes the scientists' best guess to date of what the surface might look like.

The animation and images incorporate the best data on the dimples and bulges of Vesta from ground-based telescopes and NASA's Hubble Space Telescope. The The topography is color-coded by altitude. The cratering and small-scale surface variations are computer-generated, based on the patterns seen on Earth's moon, an inner solar system object with a surface appearance that may be similar to Vesta.

"We won't know what Vesta really looks like until Dawn gets there," said Carol Raymond, Dawn's deputy principal investigator, based at NASA's Jet Propulsion Laboratory, Pasadena, Calif., who helped orchestrate the activity. "But we needed a way to make sure our imaging plans would give us the best results possible. The products have proven that Dawn's mapping techniques will reveal a detailed view of this world that we've never seen up close before."

Vesta is one of the brightest asteroids in the night sky. Under the right conditions, Vesta can be seen with binoculars. But the best images so far from ground-based telescopes and Hubble still show Vesta as a bright, mottled orb. Once in orbit around Vesta, Dawn will pass about 650 kilometers (400 miles) above the asteroid's surface, snapping multi-angle images that will allow scientists to produce topographic maps. Later, Dawn will orbit at a lower altitude of about 200 kilometers (120 miles), getting closer shots of parts of the surface.

The Dawn mission will have the capability to map 80 percent of the asteroid's surface in the year the spacecraft is in orbit around Vesta. (The north pole will be dark when Dawn arrives in July 2011 and is expected to be only dimly lit when Dawn leaves in July 2012.) The mission will map Vesta at a spatial resolution on the order of the best global topography maps of Earth made by NASA's Shuttle Radar Topography mission.

Vesta formed very early in the history of the solar system and has one of the oldest surfaces in the system. Scientists are eager to get their first close-up look so they can better understand this early chapter.

Starting in August 2009, Dawn's optical navigation lead, Nick Mastrodemos, based at JPL, developed a computer simulation of the orbits and images to be taken by the spacecraft. He adapted software developed by Bob Gaskell of the Planetary Science Institute, Tuscon, Ariz. Mastrodemos created a model using scientists' best knowledge of Vesta and simulated the pictures that Dawn would take from the exact distances and geometries in the Dawn science plan.

He sent those images to two teams that use different techniques to derive topographical heights from imaging. One, led by Thomas Roatsch, was based at the Institute of Planetary Research of the German Aerospace Center (DLR) in Berlin. The other, led by Gaskell, was based at the Planetary Science Institute in Tuscon. (Like the Roatsch team, the Gaskell team did not have prior knowledge of the model from which the simulated data were created.) The groups sent their digital terrain models back to JPL, including the video produced by Frank Preusker from DLR that is based on his full stereo processing.

Mastrodemos compared their products to the original model he made. Both techniques reproduced the known data set well with only minor differences in spatial resolution and height accuracy. "Working through this exercise, the mission planners and the scientists learned that we could improve the overall accuracy of the topographic reconstruction, using a somewhat different observation geometry," Mastrodemos said. "Since then, Dawn science planners have worked to tweak the plans to implement the lessons of the exercise."

The exercise helped both teams get an early start on updating their software and planning the necessary computer resources. "In order to plan for proper stereo coverage of an unknown body like Vesta, practice is essential," said Roatsch, who is responsible for the framing camera team's stereo observation planning.

For now, the Virtual Vesta exercise gives the Dawn science team a fleshed-out model to consider. But to see whether their educated guesses were right, the team will have to wait until Dawn arrives at its target in four months.

The Dawn mission to Vesta and Ceres is managed for NASA's Science Mission Directorate in Washington by JPL, a division of the California Institute of Technology in Pasadena, and is a project of the Discovery Program managed at NASA's Marshall Space Flight Center, Huntsville, Ala. UCLA is home of the mission's principal investigator, Christopher Russell, and is responsible for overall Dawn mission science. The Dawn framing cameras have been developed and built under the leadership of the Max Planck Institute for Solar System Research, Katlenburg-Lindau, Germany, with significant contributions by the German Aerospace Center (DLR) Institute of Planetary Research, Berlin, and in coordination with the Institute of Computer and Communication Network Engineering, Braunschweig. The framing camera project is funded by the Max Planck Society, DLR and NASA.

To learn more about Dawn and its mission to the asteroid belt, and to see the new visuals, visit: http://www.nasa.gov/dawn or http://dawn.jpl.nasa.gov .