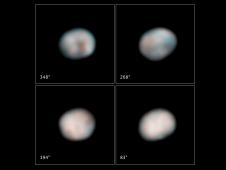 PASADENA, Calif. – NASA's Hubble Space Telescope has captured images of the large asteroid Vesta that will help refine plans for the Dawn spacecraft's rendezvous with Vesta in July 2011.

Scientists have constructed a video from the images that will help improve pointing instructions for Dawn as it is placed in a polar orbit around Vesta. Analyses of Hubble images revealed a pole orientation, or tilt, of approximately four degrees more to the asteroid's east than scientists previously thought.

This means the change of seasons between the southern and northern hemispheres of Vesta may take place about a month later than previously expected while Dawn is orbiting the asteroid. The result is a change in the pattern of sunlight expected to illuminate the asteroid. Dawn needs solar illumination for imaging and some mapping activities.

"While Vesta is the brightest asteroid in the sky, its small size makes it difficult to image from Earth," said Jian-Yang Li, a scientist participating in the Dawn mission from the University of Maryland in College Park. "The new Hubble images give Dawn scientists a better sense of how Vesta is spinning, because our new views are 90 degrees different from our previous images. It's like having a street-level view and adding a view from an airplane overhead."

The recent images were obtained by Hubble's Wide Field Camera 3 in February. The images complemented previous ones of Vesta taken from ground-based telescopes and Hubble's Wide Field and Planetary Camera 2 between 1983 and 2007. Li and his colleagues looked at 216 new images -- and a total of 446 Hubble images overall -- to clarify how Vesta was spinning. The journal Icarus recently published the report online.

"The new results give us food for thought as we make our way toward Vesta," said Christopher Russell, Dawn's principal investigator at the University of California, Los Angeles. "Because our goal is to take pictures of the entire surface and measure the elevation of features over most of the surface to an accuracy of about 33 feet, or the height of a three-story building, we need to pay close attention to the solar illumination. It looks as if Vesta is going to have a late northern spring next year, or at least later than we planned."

Launched in September 2007, Dawn will leave Vesta to encounter the dwarf planet Ceres in 2015. Vesta and Ceres are the most massive objects in the main asteroid belt between Mars and Jupiter. Scientists study these celestial bodies as examples of the building blocks of terrestrial planets like Earth. Dawn is approximately 216 million kilometers (134 million miles) away from Vesta. Next summer, the spacecraft will make its own measurements of Vesta's rotating surface and allow mission managers to pin down its axis of spin.

"Vesta was discovered just over 200 years ago, and we are excited now to be on the threshold of exploring it from orbit," said Bob Mase, Dawn's project manager at NASA's Jet Propulsion Laboratory in Pasadena, Calif. "We planned this mission to accommodate our imprecise knowledge of Vesta. Ours is a journey of discovery and, with our ability to adapt, we are looking forward to collecting excellent science data at our target."

The Dawn mission is managed by JPL, a division of the California Institute of Technology in Pasadena, for NASA's Science Mission Directorate at the agency's headquarters in Washington. Orbital Sciences Corporation of Dulles, Va., designed and built the spacecraft. Several international space organizations are part of the mission team.

To see the Vesta images and video, visit: http://www.nasa.gov/mission_pages/dawn/multimedia/vestavid20101008.html .

To learn more about Dawn and its mission to the asteroid belt, visit: http://www.nasa.gov/dawn or http://dawn.jpl.nasa.gov .