"Dawn is our baby and over the weekend it took some of its first steps," said Dawn project manager Keyur Patel of NASA's Jet Propulsion Laboratory in Pasadena, Calif. "We have two months more checkout and characterization remaining before Dawn is considered mission operational, but this is a great start." 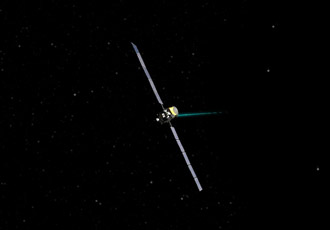 Members of the Dawn mission control team have been sending up commands and checking out spacecraft systems ever since its successful launch on Sept. 27. The first test firing of one of Dawn's three ion engines was the culmination of several days of careful preparation.

On Saturday, Oct. 6 at 6:07 p.m. Pacific Daylight Time (9:07 p.m. Eastern Daylight Time), the ion propulsion system began thrusting. Over the next 27 hours, spacecraft controllers and navigators at JPL monitored the engine's performance as it was put through its paces.

Dawn's ion engines are extremely frugal powerhouses. The 27 hours of thrusting from the ion engine resulted in the consumption of less than .28 kilograms (10 ounces) of the spacecraft's xenon fuel supply -- less than the contents of a can of soda. Dawn's fuel tank carries 425 kilograms (937 pounds) of xenon propellant. Over their lifetime, Dawn's three ion propulsion engines will fire cumulatively for about 50,000 hours (over five years) -- a record for spacecraft.

Dawn will begin its exploration of asteroid Vesta in 2011 and the dwarf planet Ceres in 2015. These two icons of the asteroid belt have been witness to so much of our solar system's history. By utilizing the same set of instruments at two separate destinations, scientists can more accurately formulate comparisons and contrasts. Dawn's science instrument suite will measure shape, surface topography,d tectonic history, elemental and mineral composition, and will seek out water-bearing minerals. In addition, the Dawn spacecraft itself and how it orbits both Vesta and Ceres will be used to measure the celestial bodies' masses and gravity fields.

Additional information about Dawn is online at http://www.nasa.gov/dawn and http://dawn.jpl.nasa.gov .