NASA's Dawn Spacecraft Enroute to Shed Light on Asteroid Belt
CAPE CANAVERAL, Fla. - NASA's Dawn spacecraft is on its way to study a pair of asteroids after lifting off Thursday from the Cape Canaveral Air Force Station at 7:34 a.m. EDT (4:34 a.m. PDT). 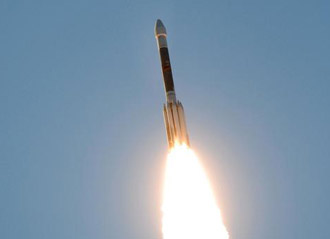 "Dawn has risen, and the spacecraft is healthy," said the mission's project manager Keyur Patel of JPL. "About this time tomorrow [Friday morning], we will have passed the moon's orbit."

During the next 80 days, spacecraft controllers will test and calibrate the myriad of spacecraft systems and subsystems, ensuring Dawn is ready for the long journey ahead.

"Dawn will travel back in time by probing deep into the asteroid belt," said Dawn Principal Investigator Christopher Russell, University of California, Los Angeles. "This is a moment the space science community has been waiting for since interplanetary spaceflight became possible."

Dawn's 4.8-billion-kilometer (3-billion-mile) odyssey includes exploration of asteroid Vesta in 2011 and the dwarf planet Ceres in 2015. These two icons of the asteroid belt have been witness to much of our solar system's history. By using Dawn's instruments to study both asteroids, scientists more accurately can compare and contrast the two. Dawn's science instrument suite will measure elemental and mineral composition, shape, surface topography, and tectonic history, and will also seek water-bearing minerals. In addition, the Dawn spacecraft and how it orbits Vesta and Ceres will be used to measure the celestial bodies' masses and gravity fields. 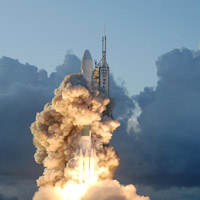 The spacecraft's engines use a unique, hyper-efficient system called ion propulsion, which uses electricity to ionize xenon to generate thrust. The 30-centimeter-wide (12-inch) ion thrusters provide less power than conventional engines but can maintain thrust for months at a time.

The management of the Dawn launch was the responsibility of NASA's Kennedy Space Center, Fla. The Delta 2 launch vehicle was provided by United Launch Alliance, Denver.

The Dawn mission to Vesta and Ceres is managed by JPL, a division of the California Institute of Technology, Pasadena, Calif., for NASA's Science Mission Directorate, Washington.