The Delta 2 rocket, fitted with nine strap-on solid-fuel boosters, safely climbed away from the Florida coastline and launch complex 17B at the Cape Canaveral Air Force Station. "We have our time machine up and flying," said Dawn Principal Investigator Christopher Russell of the University of California, Los Angeles. 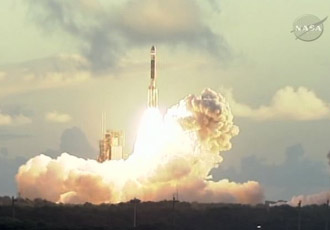 Dawn is scheduled to begin its exploration of Vesta in 2011 and Ceres in 2015. The two icons of the asteroid belt are located in orbit between Mars and Jupiter and have been witness to so much of our solar system's history.

A critical milestone for the spacecraft comes in acquiring its signal. The launch team expects that to occur in approximately 2-3 hours.

For the latest information about Dawn and its mission, visit: