NASA Spacecraft Is a 'Go' for Asteroid Belt
CAPE CANAVERAL, Fla. -- Launch and flight teams are in final preparations for the planned Sept. 27 liftoff from Pad 17-B at Cape Canaveral Air Force Station, Fla., of NASA's Dawn mission. The Dawn spacecraft will venture into the heart of the asteroid belt, where it will document in exceptional detail the mammoth rocky asteroid Vesta, and then, the even bigger icy dwarf planet Ceres.

"If you live in the Bahamas this is one time you can tell your neighbor, with a straight face, that Dawn will rise in the west," said Dawn Project Manager Keyur Patel of NASA's Jet Propulsion Laboratory in Pasadena, Calif. "Weather permitting, we are go for launch Thursday morning - a little after dawn." 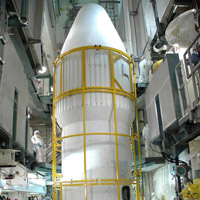 Image right: Inside the mobile service tower on Launch Pad 17-B at Cape Canaveral Air Force Station, technicians secure both halves of the fairing around the Dawn spacecraft to the upper stage booster of the Delta II rocket below. The fairing is a molded structure that fits flush with the outside surface of the Delta II upper stage booster and forms an aerodynamically smooth nose cone, protecting the spacecraft during launch and ascent. Image credit: NASA
+ Larger view

Dawn's Sept. 27 launch window is 7:20 to 7:49 a.m. Eastern Daylight Time (4:20 to 4:49 a.m. Pacific Daylight Time). At the moment of liftoff, the Delta II's first-stage main engine along with six of its nine solid-fuel boosters will ignite. The remaining three solids are ignited in flight following the burnout of the first six. The first-stage main engine will burn for 4.4 minutes. The second stage will deposit Dawn in a 185-kilometer-high (100-nautical-mile) circular parking orbit in just under nine minutes. At about 56 minutes after launch, the rocket's third and final stage will ignite for approximately 87 seconds. When the third stage burns out, actuators and push-off springs on the launch vehicle will separate the spacecraft from the third stage.

The Dawn mission will explore Vesta, and later Ceres, because these two asteroid belt behemoths have been witness to so much of our solar system's history.

"Visiting both Vesta and Ceres enables a study in extraterrestrial contrasts," said Dawn Principal Investigator Christopher Russell of the University of California, Los Angeles. "One is rocky and is representative of the building blocks that constructed the planets of the inner solar system. The other may very well be icy and represents the outer planets. Yet, these two very diverse bodies reside in essentially the same neighborhood. It is one of the mysteries Dawn hopes to solve."

Using the same spacecraft to reconnoiter two different celestial targets makes more than fiscal sense. It makes scientific sense. By utilizing the same set of instruments at two separate destinations, scientists can more accurately formulate comparisons and contrasts. Dawn's science instrument suite will measure mass, shape, surface topography and tectonic history, elemental and mineral composition, as well as seek out water-bearing minerals. In addition, the Dawn spacecraft itself and the way it orbits both Vesta and Ceres will be used to measure the celestial bodies' gravity fields.

"Understanding conditions that lead to the formation of planets is a goal of NASA's mission of exploration," said David Lindstrom, Dawn program scientist at NASA Headquarters, Washington. "The science returned from Vesta and Ceres could unlock many of the mysteries of the formation of the rocky planets including Earth."

Before all this celestial mystery unlocking can occur, Dawn has to reach the asteroid belt and its first target - Vesta. This is a four-year process that begins with launch and continues with the firing of three of the most efficient engines in NASA's space motor inventory - ion propulsion engines. Employing a complex commingling of solar-derived electric power and xenon gas, these frugal powerhouses must fire for months at a time to propel as well as steer Dawn. Over their eight-year, almost 4-billion-mile lifetime, these three ion propulsion engines will fire cumulatively for about 50,000 hours (over five years) - a record for spacecraft.

Note to Editors: A video file with animation, b-roll and sound bites is airing on NASA TV today.