Anatomy of an Ion Engine
What Is Ion Propulsion?

Ion propulsion involves the ionization of a gas to propel a craft. Instead of a spacecraft being propelled with standard chemicals, xenon gas (which is four times heavier than air) is given an electrical charge, or ionized. It is then electrically accelerated to a speed of about 25 miles per second. When xenon ions are emitted at such high speed as exhaust from a spacecraft, they push the spacecraft in the opposite direction. 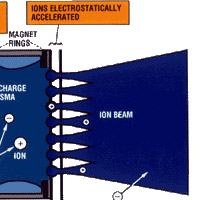 Image right: Ion propulsion - xenon gas is given an electrical charge, or ionized. It is then electrically accelerated to a speed of about 25 miles per second. When xenon ions are emitted at such high speed as exhaust from a spacecraft, they push the spacecraft in the opposite direction. Image credit: NASA
+ Larger view

In an ion thruster, xenon ions are accelerated by electrostatic forces. The electric fields used for acceleration are shaped by electrodes positioned at the downstream end of the thruster. These electrodes contain thousands of coaxial apertures. Each pair of apertures acts as a lens that electrically extracts, focuses and accelerates ions out of the thruster. NASA's ion thrusters use a two-electrode system, where the upstream electrode (called the screen grid) is charged highly positive, and the downstream electrode (called the accelerator grid) is charged highly negative. The ions are generated in a region of high positive voltage and the accelerator grid's voltage is negative, and since opposite charges attract, the positive xenon ions are attracted toward the accelerator grid and are focused out of the thruster through the apertures, creating thousands of ion jets. The stream of all the ion jets together is called the ion beam. The exhaust velocity of the ions in the beam is determined by the voltage applied the electrodes. While a chemical rocket's top exhaust speed is limited by the thermal capability of the rocket nozzle, the ion thruster's top speed is limited by the applied voltage (which is theoretically unlimited). The greater the exhaust speed, the more efficient the rocket engine. 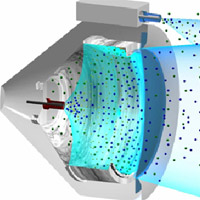 Image right: Employing a complex commingling of solar derived electric power and xenon gas, Dawn's ion engines must fire for months at a time to propel as well as steer Dawn. Over their eight year, almost 4-billion-mile lifetime, these frugal powerhouses will fire cumulatively for about 50,000 hours (over five years) - a record for spacecraft.
+ Larger view

Because the ion thruster expels a large amount of positive ions, an equal amount of negative charge must be expelled to keep the spacecraft from charging up to a large negative voltage. An electron emitter called the neutralizer is located on the downstream perimeter of the thruster and expels exactly the same number of negatively-charged electrons as there are ions leaving the thruster.