The Prius of Space
Some spacecraft achieve greatness,
And some have greatness thrust from them.


If you drive a car - and you know who you are - you have invariably come upon the dreaded dilemma of refueling. When the needle on your gas gauge wavers over the unseemly 'E,' you have to ask yourself one question - Do I stop at the next gas station or press on, hoping for a fuel oasis somewhere down the road? But what if you need to motor somewhere three billion-plus miles off the beaten path - somewhere where neither regular nor premium unleaded have so far feared to tread? 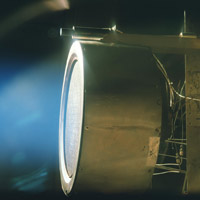 Such is the case for NASA's latest deep space explorer, Dawn. The 2,600 pound spacecraft's mission is to reconnoiter the asteroid belt's two biggest occupants - the massive asteroid Vesta and the even more massive dwarf planet Ceres. To do so, Dawn will not just scream past its prey snapping off a flurry of images as it zooms by. No, not this spacecraft.

"Dawn will be history's first mission to go out into the solar system, orbit and explore a distant body, and then go on to a totally different celestial body and explore that one," said Dawn project manager Keyur Patel of NASA's Jet Propulsion Laboratory, Pasadena, Calif. "To do all that you need a spacecraft with a lot under the hood."

What Patel considers a lot under the hood is definitely not the exo-atmospheric equivalent of a muscle car's 426 Hemi engine. After all, it is about a different type of performance up there - the kind where smooth, reliable operation and gas mileage count more than the capability to burn rubber. What it takes up there is a deep-space qualified engine, a whole bunch of juice and the same kind of gas used in photographic flash bulbs and some car headlights.

The engine is called NASA Solar Electric Propulsion Technology Applications Readiness. Most people in the deep space exploration business just refer to it as "ion propulsion." The juice is, of course, electricity, courtesy of 54 feet of electricity-producing solar array. The gas is xenon, an inert, colorless gas that is four times heavier than air and is the propellant of choice for asteroid explorers everywhere.

"Each of our three ion engines weighs in at 20 pounds and is about the size of a basketball," said Patel. "From such a little engine you can get this blue beam of rocket exhaust that shoots out at 89,000 miles per hour. The fuel efficiency of an ion engine is an order of a magnitude higher than chemical rockets and can reduce the mass of fuel onboard a spacecraft up to 90 percent. It is a remarkable system."

Praise like that does raise an important question. If ion engines are so hyper-efficient, how come NASA does not use them for all their rockets and spacecraft?

"For the same reason a drag racer would not use a fuel efficient Prius to compete in the quarter mile," said John Brophy, Dawn's ion propulsion systems manager. "Not enough get up and go."

The kind of get up and go Brophy is talking about is power - horsepower to hurtle a top fuel dragster down the track, or the massive amounts of thrust to give a rocket enough get up and go to go - out there.

"We have a powerful rocket to cover those initial 175 miles," added Brophy. "Our Delta II Heavy will give the Dawn spacecraft enough energy to leave Earth's atmosphere and its gravitational sphere of influence. But getting into space is just the beginning. There will still be a lot of motoring ahead."

A lot of motoring is right. Over the course of its eight year mission, first to Vesta and then off to Ceres, Dawn's three ion engines will accumulate 2,000 days of operation - that is 5.5 years of happy motoring!

Why so much engine time? It is as simple as a plain piece of paper.

"Hold a piece of notebook paper in your hand. The weight of that paper pushing against your hand is the same as the thrust provided by one of Dawn's ion engines -- at full throttle I might add," said Brophy. "If you had an ion engine firing here on Earth, it would not be able to push a skateboard across a sidewalk!"

Lucky for Dawn there are no sidewalks in space - and as far as we know no skateboards. What there is up there is plenty of space, so soon after the spacecraft escapes Earth's gravity, one of its ion engines can kick in and begin the long, efficient chase of its first asteroid belt target, Vesta.

At first glance, Dawn's full throttle, pedal-to-the-metal, performance is a not-so-inspiring 0-to-60 mph in 4 days. But consider this - because of its incredible efficiency, it expends only 40 ounces of xenon propellant during that time. And then take into consideration that after those four days of full-throttle thrusting, it will do another four days - and then another four. By the end of 12 days the spacecraft will have increased its velocity by over 180 miles per hour, with more days and weeks and months of continuous thrusting to come. After a year Dawn's ion propulsion system will have increased the spacecraft's speed by 5,500 mph while consuming the equivalent of only 15 gallons of fuel. By the end of its mission Dawn will have accumulated more than 5 years of total thrust time, giving it an effective change in speed of about 23,000 mph.

"In the end it is about the science," added Patel. "What we find when Dawn gets to Vesta and Ceres will re-write the history books on the beginning of our solar system. But how we get there is almost as remarkable, 1.8 billion miles to Vesta, months flying around it performing science adjusting our orbits as we go. Then we travel another billion miles to Ceres where we do it all over again. That is a lot to ask of a beam of blue light."

Those space aficionados who want to keep their "ion" the mission should note the launch period for Dawn's voyage to Vesta and Ceres opens September 26 from Cape Canaveral Air Force Station's Pad 17-B.