Dawn One Step Away From Asteroid Belt Trip
The Dawn spacecraft completed the 25-kilometer (15-mile) journey from Astrotech Space Operations in Titusville, Fla., to Pad-17B of the Cape Canaveral Air Force Station at 5:10 a.m. EDT today. The launch period for Dawn, NASA's eight-year, more than 5-billion-kilometer (3.2-billion-mile) odyssey into the heart of the asteroid belt, opens Sept. 26.

"From here, the only way to go is up," said Dawn project manager Keyur Patel of NASA's Jet Propulsion Laboratory in Pasadena, Calif. "We are looking forward to putting some space between Dawn and Mother Earth and making some space history." 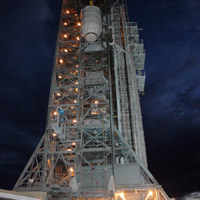 Dawn's goal is to characterize the conditions and processes of the solar system's earliest epoch 4.5 billion years ago by investigating in detail the massive asteroid Vesta and the dwarf planet Ceres. They reside between Mars and Jupiter in the asteroid belt. Scientists theorize these were budding planets never given the opportunity to grow. However, Ceres and Vesta each followed a very different evolutionary path during the solar system's first few million years. By investigating two diverse asteroids during the spacecraft's eight-year flight, the Dawn mission aims to unlock some of the mysteries of planetary formation. Dawn will be the first spacecraft to orbit an object in the asteroid belt and the first to orbit two bodies after leaving Earth. Recent images taken by NASA's Hubble Space Telescope raise further intriguing questions about the evolution of these asteroids.

Now that the Dawn payload is atop the Delta II 7925-H, a heavier-lift model of the standard Delta II that uses larger solid rocket boosters, a final major test will be conducted. This integrated test of the Delta II and Dawn working together will simulate all events as they will occur on launch day, but without propellants aboard the vehicle.

Additional information about Dawn is online at:

For more information about NASA and agency programs on the Internet, visit: