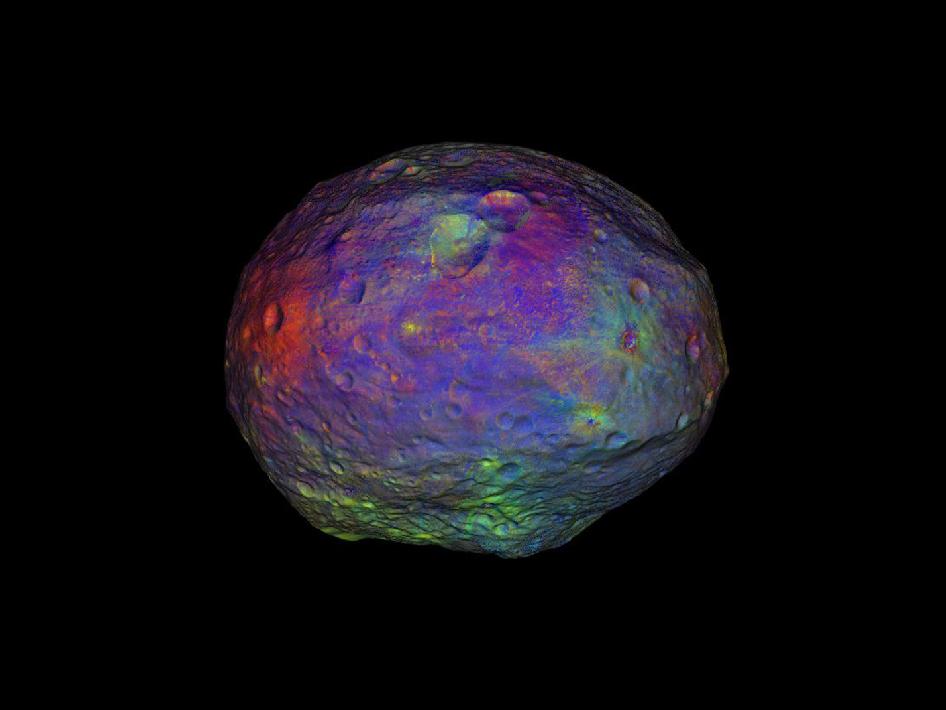 Vesta's Coat of Many Colors

This animation of Vesta is made from images taken with Dawn's framing camera. Many of the images were taken at different viewing angles to provide stereo for use in determining the topography. Other images were taken through special infrared and visible light filters in the camera. These infrared and visible light images have been combined and represented in colors that highlight the nature of the minerals on Vesta's surface. Green shows the amount of iron. Scientists have not yet determined the composition indicated by the other colors.

The animation begins overlooking Vesta's north pole and gradually moves southward. The northern polar region is shown as gray because the sun has not yet illuminated this part of Vesta's surface during Dawn's exploration of the asteroid.

It is clear from the wide range of colors that Vesta is very diverse; it is one of the most diversely colored asteroids that has been imaged. The northern troughs can be seen running obliquely from the northern shadows to the vestan equator. The "snowman" craters Marcia, Calpurnia and Minucia are also clearly visible just north of the equator. Next, the band of equatorial troughs comes into view and Vesta's heavily cratered surface is also displayed. A number of areas of ejecta show a strong red-orange color. As the viewing angle moves towards the southern pole, the large central complex protrudes from the giant Rheasilvia impact basin. The rim and some of the internal structure of the Rheasilvia impact basin are also clearly visible. The Rheasilvia impact basin has a strong greenish appearance here, which signifies a region abundant in iron.

Dawn obtained the images used to make this animation in September and October 2011. The distance to the surface of Vesta is around 420 miles (680 kilometers) on average and the images have an average resolution of about 210 feet (65 meters) per pixel. The color composite mosaic was prepared by the German Aerospace Center. The animation and the topographic model were made by the Planetary Science Institute, Tucson, Ariz.

The Dawn mission to Vesta and Ceres is managed by NASA's Jet Propulsion Laboratory, a division of the California Institute of Technology in Pasadena, for NASA's Science Mission Directorate, Washington D.C. UCLA is responsible for overall Dawn mission science. The Dawn framing cameras were developed and built under the leadership of the Max Planck Institute for Solar System Research, Katlenburg-Lindau, Germany, with significant contributions by the German Aerospace Center, Berlin, and in coordination with the Institute of Computer and Communication Network Engineering, Braunschweig. The Framing Camera project is funded by the Max Planck Society, DLR, and NASA.

More information about Dawn is online at http://dawn.jpl.nasa.gov.