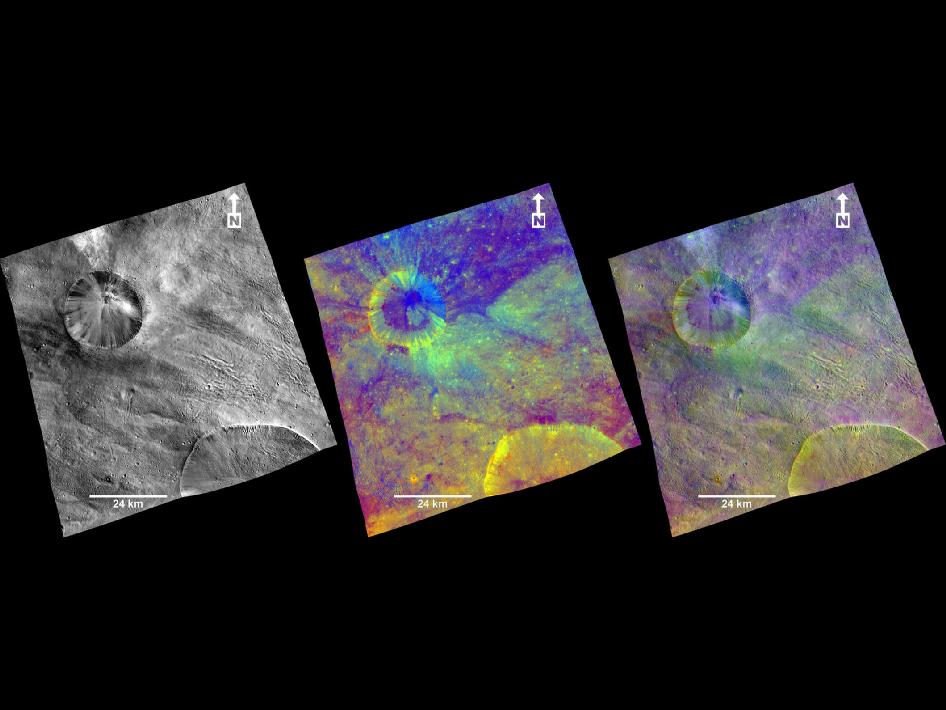 These composite images from the framing camera aboard NASA’s Dawn spacecraft show three views of a terrain with ridges and grooves near Aquilia crater in the southern hemisphere of the giant asteroid Vesta. A black-and-white image that highlights topography, a colorized image that highlights composition and a combination of the black-and-white and colorized images to show the relationship between topography and composition are included here.

An unnamed crater is visible at top left and a portion of the larger Aquilia crater is visible as a semicircle in the lower right of each image. The two craters have fresh rims and sharply defined shapes, which are interpreted to indicate relatively young ages. The crater at top left shows a defined blanket of material that was ejected around it by the impact of a space rock. That blanket appears dark blue in the colorized image.

The framing camera has seven color filters that allow it to image Vesta in a number of different wavelengths of light. Being able to image in many wavelengths enhances features and colors that would otherwise be indistinguishable to the human eye. In this colorized image, scientists assigned different color channels to specific ratios of wavelengths of radiation. In this scheme, green shows the relative strength of a particular mineralogical characteristic -- the absorption of iron. Brighter green signifies a higher relative strength of this band, which indicates chemistry involving pyroxene. On the other hand, reddish colors indicate either a different mineralogy or a stronger weathered surface.

These colorized images are composite images made from images taken during Dawn’s high-altitude mapping orbit (420 miles or 680 kilometers above the surface), on Oct. 26, 2011. They cover an area that is about 40 by 40 miles (60 by 60 kilometers). This area is near the edge of the Rheasilvia basin in Vesta’s southern hemisphere.

The Dawn mission to Vesta and Ceres is managed by NASA's Jet Propulsion Laboratory, a division of the California Institute of Technology in Pasadena, for NASA's Science Mission Directorate, Washington. UCLA is responsible for overall Dawn mission science. The Dawn framing cameras were developed and built under the leadership of the Max Planck Institute for Solar System Research, Katlenburg-Lindau, Germany, with significant contributions by DLR German Aerospace Center, Institute of Planetary Research, Berlin, and in coordination with the Institute of Computer and Communication Network Engineering, Braunschweig. The framing camera project is funded by the Max Planck Society, DLR and NASA/JPL.

More information about Dawn is online at http://www.nasa.gov/dawn and http://dawn.jpl.nasa.gov.