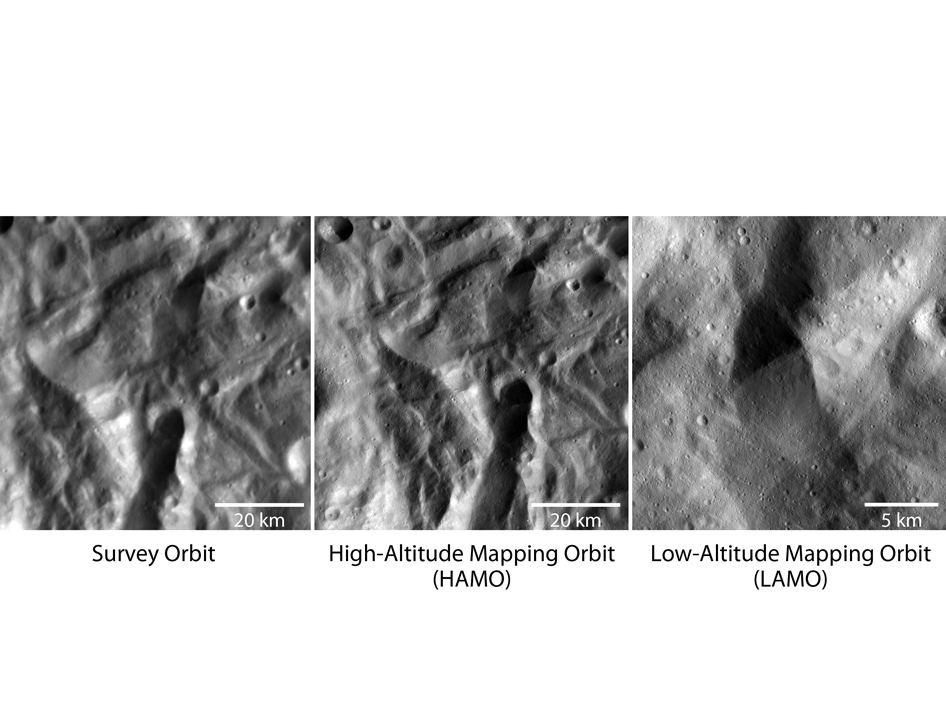 Closer and Closer to the Vesta Surface

NASA's Dawn spacecraft has spiraled closer and closer to the surface of the giant asteroid Vesta. These images were obtained by Dawn's framing camera in the three phases of its campaign since arriving at Vesta in mid-2011.

The two images on the left represent an identical area, first observed during Dawn's survey orbit (far left image). That orbit aimed to obtain a global characterization of the asteroid. The picture in the center is from Dawn's high-altitude mapping orbit (HAMO) when the surface was systematically imaged during September and October 2011 from an altitude of about 430 miles (700 kilometers) with about 230 feet (70 meters-per-pixel) resolution for global high-resolution stereo image data that were used to develop a global shape model and topographic maps.

Since Dec. 12, 2011, the orbiter has been circling Vesta in a slightly elliptical orbit known as low-altitude mapping orbit (LAMO) at an average 130 miles (210 kilometers) above the asteroid's surface. The image on the right was obtained on Dec. 13 from an altitude of 124 miles (199 kilometers) to the surface and has a resolution of 75 feet (23 meters) per pixel. It covers an area about 12 miles by 12 miles (19 kilometers by 19 kilometers).

The low altitude image has a resolution more than three times better than the resolution from the HAMO phase. There is a lot more detail in the image, like small impact craters or slumping at the steep-flanked mountain in the image center that can be identified in the two images to the left. The center of the LAMO image is at about 45.5 degrees south latitude and 325.1 degrees east longitude.

The Dawn mission to the asteroids Vesta and Ceres is managed by NASA's Jet Propulsion Laboratory, a division of the California Institute of Technology in Pasadena, for NASA's Science Mission Directorate, Washington. UCLA is responsible for overall Dawn mission science. The Dawn Framing Cameras have been developed and built under the leadership of the Max Planck Institute for Solar System Research, Katlenburg-Lindau, Germany, with significant contributions by DLR German Aerospace Center, Institute of Planetary Research, Berlin, and in coordination with the Institute of Computer and Communication Network Engineering, Braunschweig. The framing camera project is funded by the Max Planck Society, DLR, and NASA/JPL.