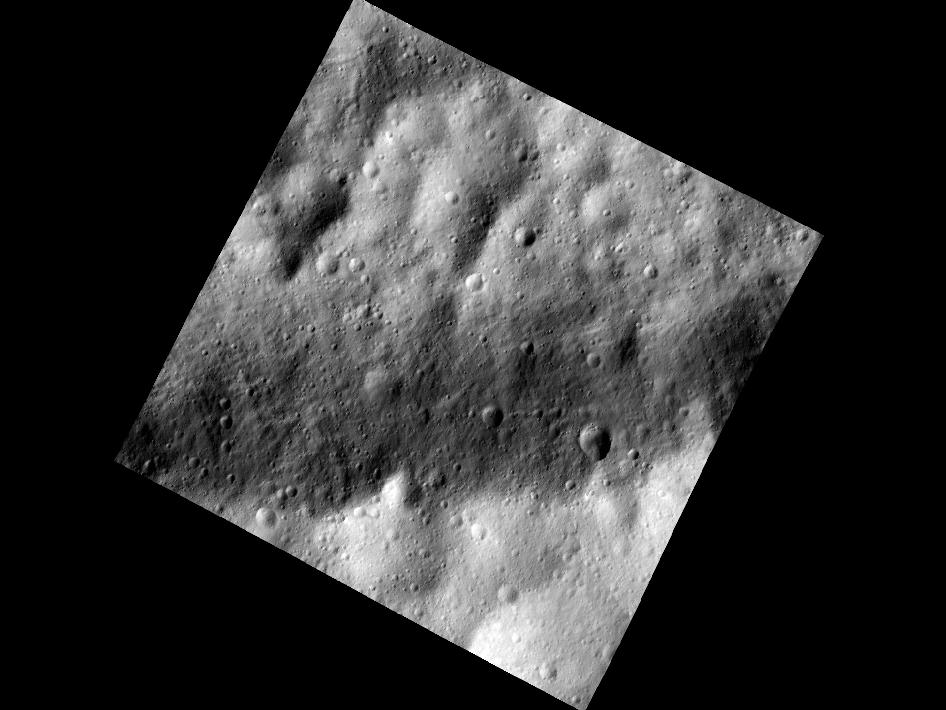 Trough in Dark and Bright on Vesta

The image was taken on Dec. 13, 2011, by Dawn’s framing camera. The image is centered around minus 6 degrees latitude and 60 degrees longitude. It was obtained at an altitude of 115 miles (185 kilometers). The image covers an area 11 miles by 11 miles (18 kilometers by 18 kilometers).

This image, one of the first obtained by NASA’s Dawn spacecraft in its low altitude mapping orbit, shows an area in the south polar area of the giant asteroid Vesta where younger terrain meets older terrain. In this image, a younger, darker blanket of material ejected by an impact is on the left and a brighter, textured deposit marked by craters is on the right. The area is within the Rheasilvia basin.

The Dawn mission to Vesta and Ceres is managed by NASA’s Jet Propulsion Laboratory, a division of the California Institute of Technology in Pasadena, for NASA’s Science Mission Directorate, Washington. UCLA is responsible for overall Dawn mission science. The Dawn framing cameras have been developed and built under the leadership of the Max Planck Institute for Solar System Research, Katlenburg-Lindau, Germany, with significant contributions by DLR German Aerospace Center, Institute of Planetary Research, Berlin, and in coordination with the Institute of Computer and Communication Network Engineering, Braunschweig. The framing camera project is funded by the Max Planck Society, DLR, and NASA/JPL.