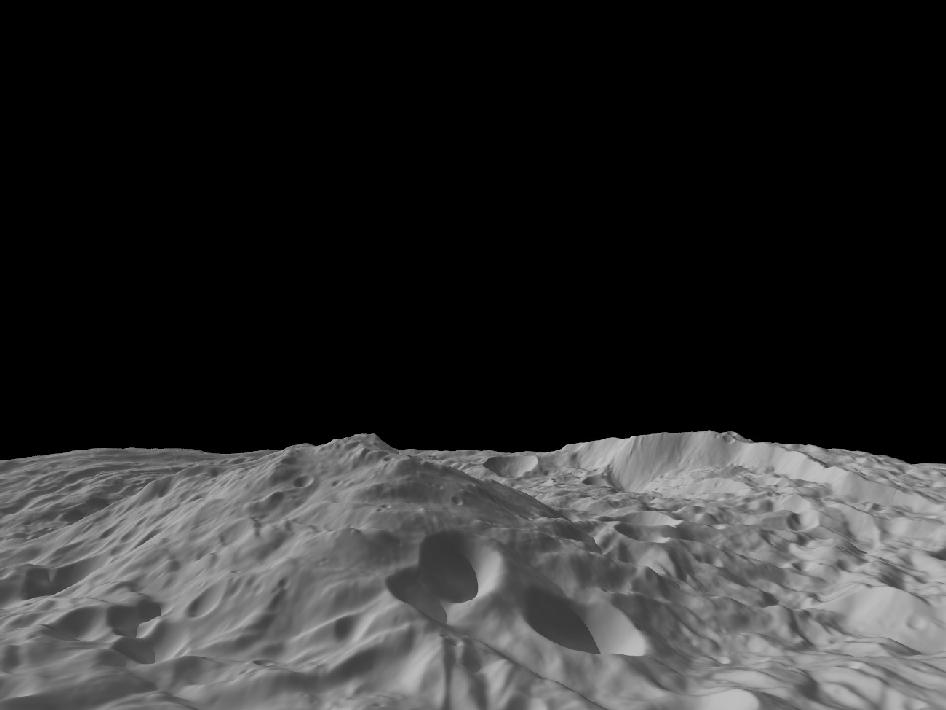 This image of the asteroid Vesta, calculated from a shape model, shows a tilted view of the topography of the south polar region. The image has a resolution of about 1,000 feet (300 meters) per pixel, and the vertical scale is 1.5 times that of the horizontal scale.

This perspective shows the topography, but removes the overall curvature of Vesta, as if the giant asteroid were flat and not rounded. An observer on Vesta would not have a view like this, because the distant features would disappear over the curvature of the horizon. (In the same way, if you were standing in North America, you would not be able to see a tall Mt. Everest in the distance, because of Earth's curvature.)

The Dawn mission to Vesta and Ceres is managed by NASA's Jet Propulsion Laboratory, a division of the California Institute of Technology in Pasadena, for NASA's Science Mission Directorate, Washington. UCLA is responsible for overall Dawn mission science. The Dawn framing cameras have been developed and built under the leadership of the Max Planck Institute for Solar System Research, Katlenburg-Lindau, Germany, with significant contributions by DLR German Aerospace Center, Institute of Planetary Research, Berlin, and in coordination with the Institute of Computer and Communication Network Engineering, Braunschweig. The Framing Camera project is funded by the Max Planck Society, DLR, and NASA/JPL.

More information about Dawn is online at http://dawn.jpl.nasa.gov .