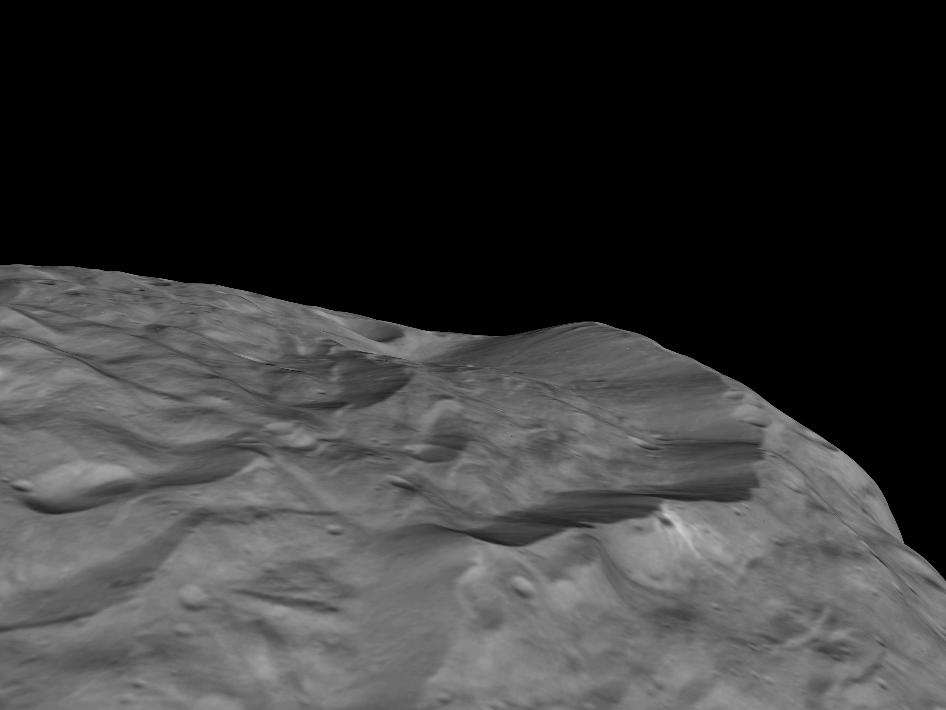 The south pole of the giant asteroid Vesta reveals cliffs that are several miles or kilometers high, deep grooves, and craters. How this wild scenery formed is not yet clear to the scientists of the Dawn mission – collisions with other asteroids may have played a role as well as internal processes that occurred during the asteroid's early phases.

This oblique view has been derived from a digital elevation model based on stereo images obtained with the framing camera instrument aboard NASA's Dawn spacecraft from an altitude of about 1,700 miles (2,700 kilometers) above Vesta's surface. The images recorded during Dawn's survey orbit have a resolution of 260 meters per pixel.

The Dawn mission to Vesta and Ceres is managed by NASA's Jet Propulsion Laboratory, a division of the California Institute of Technology in Pasadena, for NASA's Science Mission Directorate, Washington. UCLA is responsible for overall Dawn mission science. The Dawn framing cameras were developed and built under the leadership of the Max Planck Institute for Solar System Research, Katlenburg-Lindau, Germany, with significant contributions by DLR German Aerospace Center, Institute of Planetary Research, Berlin, and in coordination with the Institute of Computer and Communication Network Engineering, Braunschweig. The Framing Camera project is funded by the Max Planck Society, DLR, and NASA/JPL.