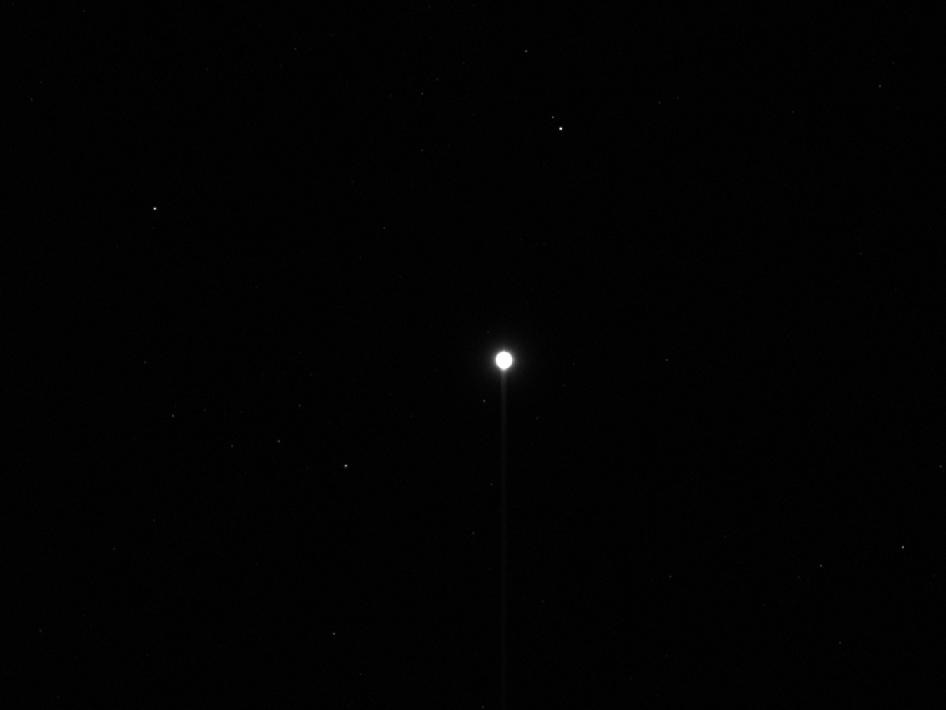 This image shows the first, unprocessed image obtained by NASA's Dawn spacecraft of the giant asteroid Vesta in front of a background of stars. It was obtained by Dawn's framing camera on May 3, 2011, from a distance of about 1.2 million kilometers (750,000 miles). Vesta is inside the white glow at the center of the image. The giant asteroid reflects so much sunlight that its size is dramatically exaggerated at this exposure.

Vesta is 330 miles (530 kilometers) in diameter and the second most massive object in the asteroid belt. But, in Dawn's early approach images, Vesta only appears approximately five pixels across in size.

This and other images help Dawn fine tune navigation during its approach to Vesta, with arrival expected on July 16, 2011.

The Dawn mission to Vesta and Ceres is managed by the Jet Propulsion Laboratory, for NASA's Science Mission Directorate, Washington, D.C. It is a project of the Discovery Program managed by NASA's Marshall Space Flight Center, Huntsville, Ala. UCLA, is responsible for overall Dawn mission science. Orbital Sciences Corporation of Dulles, Va., designed and built the Dawn spacecraft.

The framing cameras have been developed and built under the leadership of the Max Planck Institute for Solar System Research, Katlenburg-Lindau, Germany, with significant contributions by the German Aerospace Center (DLR) Institute of Planetary Research, Berlin, and in coordination with the Institute of Computer and Communication Network Engineering, Braunschweig. The framing camera project is funded by the Max Planck Society, DLR, and NASA.

JPL is a division of the California Institute of Technology, in Pasadena.

More information about Dawn is online at http://www.nasa.gov/dawn and http://dawn.jpl.nasa.gov .