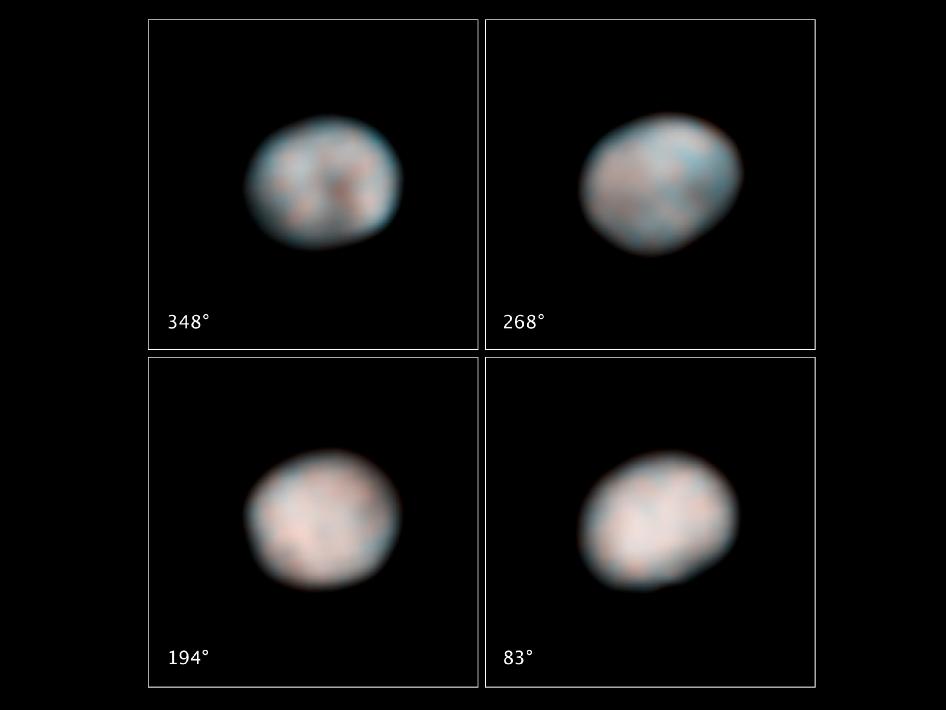 The Faces of Vesta

NASA's Hubble Space Telescope snapped these images of the asteroid Vesta in preparation for the Dawn spacecraft's visit in 2011.

Each of the four Hubble images captures views of Vesta during its 5.34-hour rotation period. Hubble's sharp "eye" can see features as small as about 40 kilometers (25 miles) across in these images. Vesta was 211 million kilometers (131 million miles) from Earth when Hubble made the observations.

The images show the difference in brightness and color on the asteroid's surface. These characteristics hint at the large-scale features that the Dawn spacecraft will see when it visits the potato-shaped asteroid.

Vesta is somewhat like our moon, with ancient lava beds (the dark patches) and powdery debris, the pulverized remains of impacts (the orange-colored areas). The flattened area on one end of Vesta, visible in the top row of images, is a giant impact crater formed by a collision billions of years ago. The crater is 460 kilometers (285 miles) across, which is close to Vesta's roughly 530-kilometer (330-mile) diameter. Vesta is about the size of Arizona.

Astronomers used the images, taken with Hubble's Wide Field Camera 3, to better determine Vesta's spin axis. Based on the Hubble observations, astronomers calculated a slightly different, and more precise, rotation axis for Vesta. The new calculation will change the pattern of sunlight expected to illuminate the asteroid when Dawn arrives.

Determining a more accurate spin axis for Vesta will also help scientists refine the Dawn spacecraft's orbit around the asteroid. Dawn will orbit the rocky object for a year, beginning in July 2011. The spacecraft will then travel to the dwarf planet Ceres, arriving in 2015.

Vesta is one of the largest of a reservoir of about 100,000 asteroids, the leftover material from the formation of our solar system planets 4.6 billion years ago.

Hubble has kept its "eye" on Vesta for more than 15 years, beginning in 1994. Hubble images of Vesta in 1997 helped astronomers discover the asteroid's immense impact crater.

Astronomers combined views of Vesta in near-ultraviolet and blue light to construct these images. The images were taken on Feb. 25, 2010.