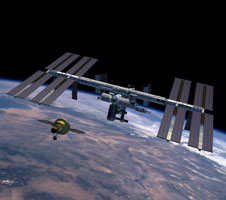 This artist's rendering represents a concept of the Orion spacecraft approaching the International Space Station in Earth-orbit. Image credit: NASA

It was a virtually flawless launch, a perfect mission, so far. The ground operations personnel reported early on that all was well; tanking and launch went off almost without a hitch and was only briefly delayed while the ground team verified that a bird strike on the Upper Stage did no damage. Orion is on its way to dock with the International Space Station.

The launch of the first Virtual Mission for NASA’s Constellation Program was an unqualified success. Mission controllers, ground operators and engineers crowded rooms at multiple NASA centers to monitor the launch. The Virtual Missions are the brainchild of Constellation Program Manager, Jeff Hanley. Their purpose is to simulate the mission planning processes and utilize new software designed to reduce mission certification time. The Virtual Missions are lead by Mission Manager Bob Castle and are a tool to verify NASA has the right processes in place to achieve its reduced flight preparation time.

To the observers of the recent mission launch, the behind the scenes work was invisible. Computer screens captured “live” engineering data that looked more like the images seen on a video gaming program. Instead of numbers churning across the monitor screens, the data looked more like video game animations.

So far the first Virtual Mission has produced a nice list of Lessons Learned that will be used to refine mission processes for the real Constellation missions. The list includes mission improvements such as the need to develop a process for management of the water system on returning Orions and the need to access the Service Module for later cargo stowage.

The business side of building rockets and planning and executing a mission to the International Space Station or the moon is not what most people consider when they think of NASA. But, the Virtual Missions show things like schedule changes, cargo distributions and vehicle performance can have a big effect. Too much cargo can lower the vehicle performance. Or a change in that payload might cause a delay, or have a ripple effect downstream on the payload of the next mission. And, almost every change is reflected in how much a mission costs.

Representatives from JSC, MSFC, KSC, Ames and JPL are participating the Virtual Missions. The next Virtual Mission will kick off in November 2009, with its launch scheduled for June 2010.
› Back To Top