Grow Text SizeShrink Text Size
World's Largest Vacuum Chamber Gets Extreme Makeover
A hundred trucks recently lined up at NASA Glenn Research Center's Plum Brook Station carrying 1,600 tons of concrete. And that was just enough for the foundation of one of the new facilities NASA is building to test the Orion crew exploration vehicle. 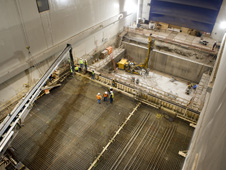 › Watch Flash Video The agency is constructing two immense additions, an acoustic chamber and vibration test stand, adjacent to the world's largest vacuum chamber in the Space Power Facility in Sandusky, Ohio. The renovated facility will test NASA's new spacecraft, Orion, in all the challenging environments it will encounter during spaceflight.

Orion is part of NASA's Constellation Program, which is preparing to send astronauts to live and work on the moon. The Orion spaceflight hardware will undergo four tests in the Space Power Facility once construction is completed. Thermal vacuum testing and electromagnetic interference testing will take place in the vacuum chamber. Thermal vacuum testing will confirm that the spacecraft can withstand the extreme hot and cold temperatures present in space, and electromagnetic interference testing will verify the reliability of Orion's communication and electronic systems. The acoustic and vibration tests will occur in the new facilities.

The vibration test stand will be used to assess whether the spacecraft is able to handle the violent vibrations it will endure during liftoff. The 75,000-pound craft will sit on a huge vibration table; comprising a 125,000-pound mass that must be shaken with an intensity equal to that of a launch.

"A rocket isn't a very smooth ride," said Jerry Carek, Space Power Facility Manager. "We want to simulate the vibration effects from the rocket engines that are going to launch it." 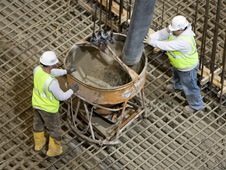 An object of this magnitude requires a strong support system. Heavy steel rods will be installed 60 feet below the floor of the building and secured to the ground using 4 million pounds of concrete.

The engineers who designed the additions were careful to ensure that vibrations from this "mini-earthquake" do not carry over to the neighboring vacuum chamber and damage it.

"Whenever you do anything this big and new, everything's a challenge," said Steve Simons, of Glenn's Space Flight Systems Office. "You have to turn your whole way of thinking around."

The second addition being built, the acoustic chamber, will be the most powerful of its kind in the world. It will subject the spacecraft to extreme forces created by powerful sounds during liftoff.

Twenty-four horns will blow high-pressured nitrogen gas to match the intensity level of the sounds produced during the launch. Most acoustic facilities have around two or three horns. But for this facility, everything is being built bigger in scale to more accurately assess the spacecraft. 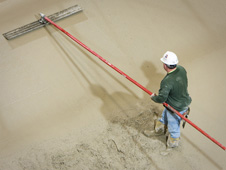 "We want to test it in the exact configurations that it will fly in," Simons said. "You test as you fly, and fly as you test."

Just as different sized brass instruments create different frequencies, specifically sized horns were chosen to precisely match the sounds created during launch. The walls that surround the chamber need to be two feet thick concrete in order to withstand the forces created by the magnitude of the sound.

"The sound produced can be compared to putting your ear right next to a jet engine, just 10 ten times as loud," Carek said.

To enclose the acoustic chamber, a door of vast proportion is being built as well. The door, weighing in at 675,000 pounds, must be built in place due to its size.

"It's kind of like we're building a ship in a bottle," Carek said.

Construction began a year ago with the demolition of a bare concrete test cell, where the new acoustic chamber is now being built. The facility is scheduled to begin testing the Orion Ground Test Article in the spring of 2010.

"This is a one of a kind, unique space facility where you can test every element of space flight," Carek said. "Nothing like this has ever been done."

EDITOR'S NOTE: Steve Simons retired from NASA's Glenn Research Center after this article was written.
› Back To Top