World's Largest Vacuum Chamber to Test Orion
Before NASA's new spacecraft, Orion, carries the next generation of explorers into space, it first will make a shorter journey to the world's largest vacuum chamber. In this massive, cathedral-like structure, it must endure a variety of rigorous challenges.

Called the Space Power Facility, the vacuum chamber resides at NASA Glenn Research Center's Plum Brook Station in Sandusky, Ohio. It measures 100 feet in diameter and towers at 122 feet tall. Its immense size and ability to simulate the vacuum of space make it ideal for testing the Orion crew exploration vehicle. 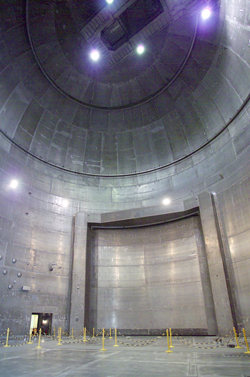 On June 11, the facility opened its doors for a rededication ceremony. Agency managers, community stakeholders and elected officials gathered to celebrate the role this facility will play in the country's next phase of space exploration.

Making its first flights early in the next decade, Orion is part of NASA's Constellation Program to send human explorers back to the moon and then onward to Mars and other destinations in the solar system.

The fully assembled spacecraft will stand 75 feet tall and include a crew module to carry the astronauts; a service module to provide power, propulsion and communications; a launch abort system for emergency escapes; and an adapter to connect the spacecraft to its launch system.

But before NASA can launch Orion, the agency "must demonstrate that the vehicle is capable of withstanding the harsh environment of space," said Robert Moorehead, Director of Space Flight Systems at Glenn. "The Space Power Facility will help us do that."

In 2008, workers will begin modifying the building to accommodate these tests. A new vibration and acoustic test chamber, a mechanical vibration test stand and electromagnetic interference equipment will enable the facility to simulate the conditions Orion must endure on its mission.

"The Space Power Facility will be the only facility in the U.S., if not the world, that can perform complete environmental testing on a fully assembled spacecraft," said David Stringer, director of Plum Brook Station.

The new reverberant acoustic chamber will subject Orion to the intense vibrations and shockwaves it will endure during launch and ascent. In the vacuum chamber, infrared lamps and cold walls flushed with liquid nitrogen will simulate the extreme hot and cold temperatures of space. The electromagnetic interference tests will also take place inside the vacuum chamber, which blocks radio frequencies and cell phone signals. Electromagnetic interference equipment positioned on moving platforms will challenge the reliability of Orion's communications and electronics systems. 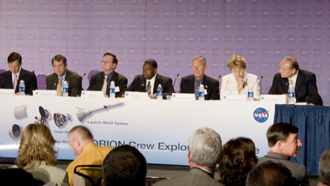 Built in 1969, the Space Power Facility has tested the International Space Station's radiator and solar arrays, the Mars rover landing systems, and most of the nation's major rockets, including Atlas and Delta. With the upgrades, the Plum Brook facility also will be well suited to test next-generation lunar landers, robotic systems, and military and commercial spacecraft.

"Plum Brook will have an important role to play in the future exploration of space," said NASA's Associate Deputy Administrator Charles Scales. "It's hard to believe that in less than two decades, people will look up and, with nothing but a strong telescope, see the shining lights of a research center on the moon."