Using History to Design the Future 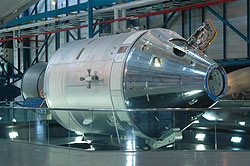 Visitors to Kennedy Space Center in Florida recently poured into the Saturn V Center and curiously stepped up to a display. They watched as a small group of lab-coated experts surrounded an aluminum box about the size of a file cabinet.

Image right: The Apollo Command Modules on display at Kennedy Space Center's Saturn V Complex. The umbilical housing compartment can be seen between the service and crew modules in the lower-right area of the image. Photo credit: NASA/KSC + View Larger Image

The air filled with cautious excitement as the box was slowly unbolted and carefully lowered, exposing the contents for the first time in decades.

With an eye toward the future, the experts were working on a piece of history. NASA had commissioned the team to inspect an umbilical connection from an Apollo-era spacecraft. The agency is seeking to tap the experience of past engineers as it develops Orion, the new crew exploration vehicle for the Constellation Program. 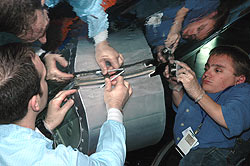 "We're looking at this device to help improve the design for the Orion vehicle, the next-generation manned space vehicle," said Damon Delap, mechanical engineer of NASA's Glenn Research Center in Cleveland. "We're learning from the past and can see that the former engineers did it very well, so we're looking to see what they did."

NASA engineers wanted to inspect an intact Apollo-era umbilical connection, which is used to provide communication, electrical and life support connections to the astronauts in the crew compartment. They were particularly interested in the umbilical release mechanism. 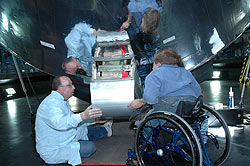 But finding one was like looking for a needle in a haystack because, in the Apollo days, the umbilical was severed before the astronauts came back to Earth. A guillotine-like device cut through all the tubes and wires between the command and service modules before the crew headed home.

"The service module had all the communication and life-sustaining equipment the crew needed (in space) and, before they came back through the atmosphere, the umbilical cord had to be detached," said Dan Catalano, Orion service mechanisms and pyrotechnics lead of Glenn Research Center.

A break finally came by chance when Catalano came across a family's vacation photos posted on the Internet. There he saw the happy family standing in front of the Apollo Command Modules at the Saturn V Complex. And behind them was an umbilical housing! 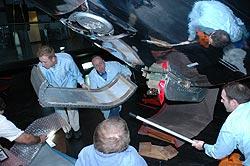 Image left: It took a group effort to carefully carry the housing cover to a protective area for storing until the inspection was completed. Photo credit: NASA/KSC + View Larger Image

The Apollo spacecraft on display, designated CSM 119, was the backup for the Apollo-Soyuz Test Project but never flew. What makes this artifact so significant to the Constellation Program are the housing components located between the command and service modules.

After finding the umbilical housing -- the only one that exists intact in the United States -- NASA spent many months coordinating and planning to prepare for the inspection project. Orion Integration Engineer Tracy Gill of NASA's Kennedy Space Center, Delap, Catalano and Lamoreaux gathered at the Saturn V Center to inspect the Apollo-age capsule because of its similarity to the Orion crew compartment. 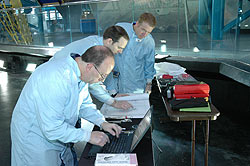 A few umbilical drawings found at the National Archives in Fort Worth, Texas, gave the engineers a "road map" to what they were seeking.

Image right: Delap and Gill pour over the historical umbilical documents and plans while Catalano records the process and result of every procedure. Photo credit: NASA/KSC + View Larger Image

"It was very worthwhile to do this and made the drawings come to life," Delap said.

Catalano and Delap worked with surgical precision to remove the housing, sometimes using only their gloved fingertips for tools. Every action was photographed, videotaped and documented. They went back and forth checking out the reference materials on a table next to the modules to be sure they were on the right track.

"Seeing the actual housing and all its contents filled in the gaps of the information we needed to take back and work on," said Catalano. "We could see the pieces that were missing in the drawings; we found them through our hands-on inspection." 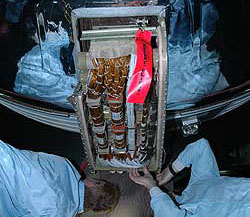 The goal for the new Crew Exploration Vehicle connection is reusability. The newer design for Orion will not have the same number of tubes and wires because of today's technology, but a lot of the information that comes from this inspection will be combined with the old design that worked for the Apollo days. However, the next-generation crew module will be larger and more technologically advanced.

Image left: With the housing cover safely detached the intact cord assembly is in full view. Still in place after all these years is the "Remove Before Flight" caution ribbon. Photo credit: NASA/KSC + View Larger Image

"It was very important to see how they built the Apollo mechanism because...well, it worked many times and instead of reinventing the wheel...it's good to start with something we know worked," said Lamoreaux. "It was a very valuable experience to come down here. I can use (the findings) to improve my design."

At the end of the inspection, the team members dexterously reassembled the housing, leaving it as they found it. They agreed that a lot will be learned from the trials, tribulations, successes and failures of the Apollo engineers, giving the "new guys" a foundation to build the new Orion vehicle even better. 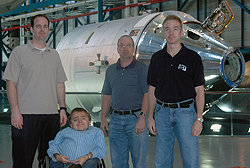 When asked what it was like to have a chance to work on a piece of history, Catalano said: "For me, it's a very big highlight. I grew up in the Apollo age and used to watch all the launches. I was a product of that era. To be able to come and actually touch the hardware is a real thrill for me."

Although ownership of the Apollo Command and Service Module was transferred by NASA to the Smithsonian Institution in Washington in 1977, it is on permanent display at the Apollo/Saturn V Center at Kennedy.