Grow Text SizeShrink Text Size
A Perfect STORRM
It was a perfect STORRM. On Tuesday, July 20, NASA and its industry partners Lockheed Martin Space Systems and Ball Aerospace & Technologies Corp., successfully demonstrated a new sensor technology that will make it easier and safer for spacecraft to rendezvous and dock to the International Space Station. 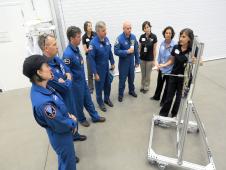 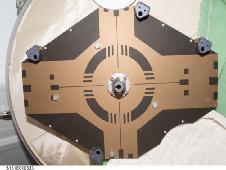 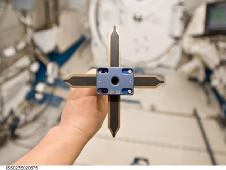 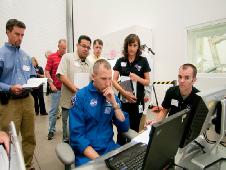 This new docking navigation system prototype consists of an eye-safe lidar Vision Navigation Sensor, or VNS, a high-definition docking camera, as well as the avionics and flight software. Both sensors will provide real-time three-dimensional images to the crew with a resolution 16 times higher than the current space shuttle sensors. This next generation system also provides data from as far away as three miles – three times the range of the current shuttle navigation sensor.

"You are looking at the future of rendezvous and docking right here," said David L. Taylor, president and CEO of Ball Aerospace, as he welcomed dozens of NASA and industry engineers to the demonstration.

The hardware will be tested by astronauts aboard STS-134, the last planned shuttle mission, currently scheduled for February 2011, as part of the Sensor Test for Orion Relative Navigation Risk Mitigation (STORRM) Development Test Objective (DTO). On Flight Day 11 of the mission, the shuttle crew will conduct an unprecedented on-orbit maneuver; they will undock from the space station and then re-rendezvous with the station on an Orion-like approach.

Five retro-reflectors, which will serve as targets for the VNS, were installed on the station's visual docking target during the STS-131 shuttle mission in May.

The demonstration, held at Ball Aerospace in Boulder, Colo. offered the STORRM team the chance to operate the flight hardware for personnel who will be supporting STORRM during the mission -- the astronaut crew, flight director, and mission operations personnel.

Mark Kirasich, deputy Orion Manager from the Orion Project Office at NASA's Johnson Space Center in Houston recognized the STORRM team for its perseverance and dedication to develop the DTO flight hardware on an aggressive and success-oriented schedule.

The intense project required NASA engineers and contractors to work holidays, evenings and weekends in order to successfully deliver the DTO flight hardware per the shuttle schedule. Normally, it takes more than two years to develop flight hardware, but the STORRM team was able to deliver the DTO sensor hardware in half that time. Despite the aggressive schedule, the team finished on time.

"It's been challenging -- but we were successful," said Frank Novak, STORRM project manager from NASA's Langley Research Center. "We were successful despite many challenges; my hat's off to the team."

"We have met every milestone along the way, and I could not be more proud of this team," echoed Howard Hu, manager of Orion Vehicle Performance and Analysis, responsible for STORRM from NASA Johnson.

Following the demonstration, the STS-134 crew was briefed on the STORRM hardware and mission objectives. After the hardware demonstration, the STORRM avionics lead Tom Johnson from NASA Langley and the Deputy Principal Investigator Sean Maguire from NASA Johnson, led the crew training activities, which gave crewmember Andrew Feustel and Commander Mark Kelly "hands on" time to gain experience running the software application and the STORRM flight hardware.

"I've been to the space station three times, and this is the first time that I'll be doing something like this," said Kelly, who will serve as commander on STS-134.

On Aug. 3, the STORRM hardware will be shipped to NASA's Kennedy Space Center where it will be integrated into the shuttle.

"This is a huge step forward for us," said Kirasich. "You saw Pad Abort-1. This is the next big thing."

STORRM was developed by the Orion Project Office at NASA Johnson, which is responsible for program management, technology evaluation, flight test objectives, operational concepts, contract management and data post-processing. Engineers at NASA Langley were responsible for engineering management, design and build of the avionics, STORRM software application and reflective elements. They are also responsible for the integration, testing and certification of these components. Industry partners Lockheed Martin Space Systems and Ball Aerospace Technologies Corp. were responsible for the design, build and testing of the VNS and docking camera.