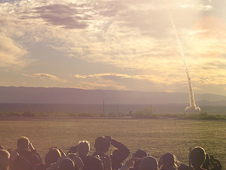 NASA's Pad Abort 1 flight test, a launch of the abort system designed for the Orion crew vehicle, lifted off at 9 a.m. EDT May 6 at the U.S. Army's White Sands Missile Range (WSMR) near Las Cruces, N.M. The flight lasted about 135 seconds from launch until the crew module touchdown about a mile north of the launch pad.

The flight was the first fully-integrated test of this launch abort system design. The information gathered from the test will help refine design and analysis for future launch abort systems, resulting in safer and more reliable crew escape capability during rocket launch emergencies.

The test involved three motors. An abort motor produced a momentary half-million pounds of thrust to propel the crew module away from the pad. It burned for approximately six seconds, with the highest impulse in the first 2.5 seconds. The crew module reached a speed of approximately 445 mph in the first three seconds, with a maximum velocity of 539 mph, in its upward trajectory to about 1.2 miles high.

The attitude control motor fired simultaneously with the abort motor and steered the vehicle using eight thrusters producing up to 7,000 pounds of thrust. It provided adjustable thrust to keep the crew module on a controlled flight path and reorient the vehicle as the abort system burned out.

The Orion Project has begun the process of recovering all of the test articles from the WSMR and will be evaluating all of the data over the coming weeks.

› View Archive
› Back To Top