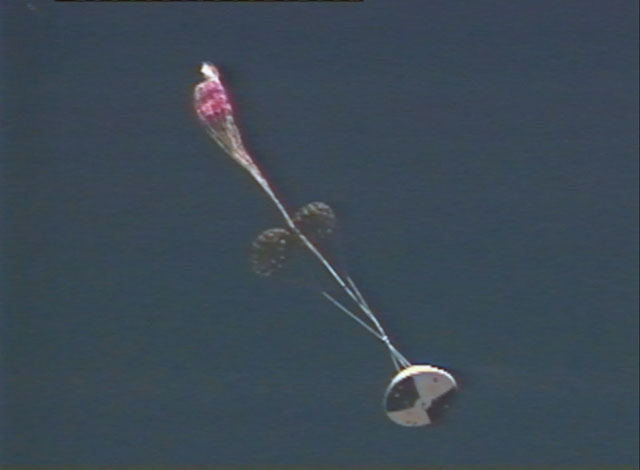 JSC2008-E-094716 (31 July 2008) --- As the mock-up is released from the pallet, the programmer chute and two stabilization chutes are released to set up the proper test condition. The programmer chute -- the chute that is supposed to get the Orion mock-up in the correct orientation, altitude and speed for the test -- failed to inflate properly. The chute was one of 18 parachutes used during the test. Photo credit: NASA 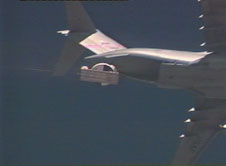 + View high-resolution image
+ View low-resolution image
JSC2008-E-094712 (31 July 2008) --- A test set-up parachute failed during the July 31, 2008, test of parachutes for the recovery system for the Orion Crew Exploration Vehicle. Shown here, the Orion mock-up, attached to a pallet, is pulled from its C-17 transport above the U.S. Army's Yuma Testing Grounds in Arizona. Photo credit: NASA 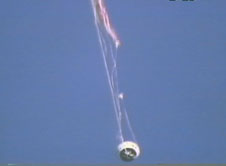 + View high-resolution image
+ View low-resolution image
JSC2008-E-094721 (31 July 2008) --- Only one of the three main parachutes for the recovery system held to the mock-up during the July 31, 2008, test. The parachute was torn and too damaged to inflate properly and slow the falling mock-up. Photo credit: NASA 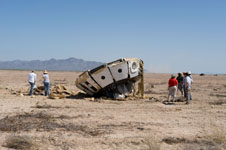 + View high-resolution image
+ View low-resolution image
JSC2008-E-064698 (31 July 2008) --- The mock-up used during the July 31, 2008, test of the parachute system for the recovery system of the Orion spacecraft was severely damaged when a test set-up chute failed to properly inflate and caused the parachute system to fail. The failed parachute --called a programmer chute -- was supposed to get the test vehicle set up to the correct test conditions. Photo credit: NASA
› Back To Top