Grow Text SizeShrink Text Size
Ping-Pong Balls to Float Crew Capsule Simulator
If ping-pong balls can float a sunken boat, they should be able to keep an uncrewed space capsule simulator from sinking. 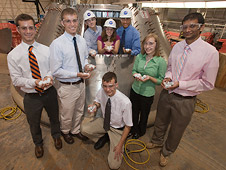 That's what a team of summer students and engineers think at NASA’s Langley Research Center in Hampton, Va. Langley is fabricating a proposed design of an astronaut crew module simulator for uncrewed flight-testing as part of the agency's effort to build a vehicle to replace the space shuttle.

Because the crew module will not be pressurized during the test, it will not have the buoyancy of a pressurized spacecraft. This puts the simulated crew module at risk of sinking to the bottom of the Atlantic Ocean after splashdown.

To save the valuable test article for analysis and possible reuse, Langley called on a team of creative minds for a solution.

And as it turned out, inexpensive, lightweight ping-pong balls provided the answer. Langley engineer John DiNonno proposed the idea, and the Orion Flight Test Office told the team to study it. 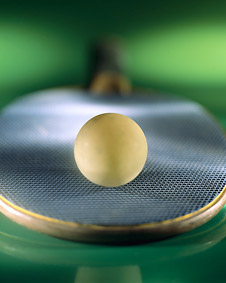 ›› Ping-pong balls are made of celluloid, which is processed cotton.
›› Each ping-pong ball weighs less than an ounce (2.7 grams) and is roughly 1.5 inches (38 - 40 mm) in diameter.
›› Ping-pong ball quality is rated from zero to three stars. 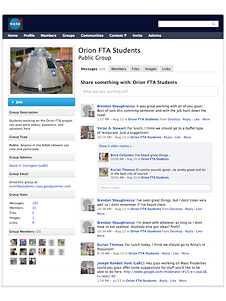 The ping-pong ball team has been using a social media tool called Yammer to communicate with each other, share files, links, work status, questions, and solutions.

"Yammer has been a great tool to communicate with the interns," said Brendan Shaughnessy, an engineer in the Mechanical Systems Branch. "They can post updates on their work or links to websites they found. I can also let them all know about something I need them to do or that I've done in one quick message."

To join NASA's Yammer site, you must have an email address that ends in nasa.gov.

The Orion FTA Students site is open to anyone with a NASA Yammer account.

"At first we didn't really realize that we were going to get so far in proving that it would be possible," said Kirk, a Suffolk, Va., native attending Virginia Tech as an aerospace engineering major. "But when we thought about everything logically, it just seemed like ping-pong balls were the way to go."

She and a team of seven other students worked the project in Langley's Mechanical Systems Branch, where they were assigned for the summer.

DiNonno got the idea from a Discovery Channel program about raising a sunken boat using 27,000 ping-pong balls.

Engineer David Covington said that when DiNonno suggested the ping-pong ball idea, "I just laughed. Not a 'what are you thinking' kind of laugh, but more of a 'that's the most awesome thing I've heard in a long time' laugh. I asked him 'are you serious?' and he said 'yeah, we're authorized to do a four-week study.' So we went straight to work."

Ensuring the outcome would be relatively low-cost was a top priority, said DiNonno.

"Recovering the capsule was not a requirement, but it was a desire," he said. "So there wasn't going to be a lot of investment in it."

The students divided the tasks needed to determine if the idea was feasible, each becoming a "principal investigator" for a specific area.

They tested ping-pong balls of varying quality, much the way spacecraft hardware is tested. They studied how the balls would react to the near-vacuum at the edge of space. Using buoyancy tests, they determined how well the balls would float.

The students also subjected the ping-pong balls to mechanical loads using a hydraulic press, and heated them to see how they would react to the high temperatures of descent into the Earth's atmosphere. And they performed electrostatic discharge tests to determine if the balls would produce a static charge that could disrupt the space capsule's electronics.

"Through all our testing and calculations, we figured out that it could be a safe and viable option," said Blount, of Yorktown, Va.

Keeping the crew module afloat would take at least 150,000 ping-pong balls, the students estimate, at a retail price of 50 cents or less each -- a fraction of the cost of traditional options. The students hope to reduce the cost through a bulk purchase.

Then, when the unsealed capsule splashes down, the buoyancy of the ping-pong balls will offset the weight of incoming water and it will float instead of sink.

The ping-pong balls also will reduce the volume of air that needs to be vented from the capsule during ascent - as well as drawn in during descent - as the capsule travels through significant changes in atmospheric pressure.

Approval of the flight test, as well as a launch date, has yet to be determined. "Even if it is not used, it's an idea that's out there that someone else could use," said Langley engineer Amanda Cutright, a student mentor.

Cutright said she has been enthused by the students.

"It's awesome working with them," she said. "They bring a different perspective. I've been really impressed with how quickly they pick up new ideas and new technology. It seems each team of students that we mentor learns quicker and is able to provide creative ideas."

Kirk said the ping-pong ball project has been a unique experience. At school, she said, "we do lab experiments but nothing similar to this at all. Being able to develop an experiment that will be used for space flight tests is an opportunity of a lifetime."