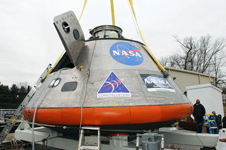 NASA and Department of Defense personnel familiarize themselves with a Navy-built, 18,000-pound Orion mock-up in a test pool at the Naval Surface Warfare Center's Carderock Division in West Bethesda, Md. Ocean testing will begin April 6 off the coast of NASA's Kennedy Space Center in Florida. The goal of the operation, dubbed the Post-landing Orion Recovery Test, or PORT, is to determine what kind of motions the astronaut crew can expect after landing, as well as conditions outside for the recovery team. The experience will help NASA design landing recovery operations including equipment, ship and crew necessities. Credit for Photos: Ryan Hanyok and the NSWC photographic team led by Peter Congedo

Orion is making a big splash. A mock-up of the spacecraft that will carry the next generation of astronauts to the moon and beyond is traveling down the East Coast and undergoing tests to help NASA understand its performance in water.

The Post-landing Orion Recovery Tests (PORT) began in late March at the Naval Surface Warfare Center, Carderock Division in Bethesda, Md. This first round took place in a controlled water environment. Testing near Kennedy Space Center in April will be done in the rougher, uncontrolled waters of the Atlantic Ocean. Crews will head out over several days and at varying distances from land to assess the vehicle's performance in open water landing conditions. Recovery teams will gain experience dealing with Orion in water. The tests will also help NASA understand the motions astronauts will experience within the craft. The same boats that have been used to recover the space shuttle's solid rocket boosters will tow the capsule for these tests.

NASA and the Department of Defense are working collaboratively to enhance each agency’s expertise in sea operations. This partnership pares down costs for all parties involved while allowing lessons learned to be incorporated into Orion designs as early as possible. The PORT program is managed by the operations and test integration office in the Constellation Program at NASA's Johnson Space Center in Houston.

Before the ocean tests, though, Orion made a stop on the National Mall in front of the National Air and Space Museum on March 30. School children, media and Capitol Hill staffers and members all visited the capsule. This full-scale mock-up and others like it will continue to undergo testing around the country for various purposes. Another full-size mock-up, for instance, will be used in a test of launchpad abort systems later this year.

And the PORT program will continue. The next phase will focus on astronaut crew egress operations. In the coming year, the Department of Defense will test and evaluate procedures, methodologies, planning and training for rescue and recovery forces, including water-borne capsule recovery. Support includes, but is not limited to, U.S. Navy divers and swimmers and U.S. Air Force Guardian Angels. Cooperation between NASA and the Department of Defense dates back to the Mercury program, and NASA looks forward to future collaborative efforts to move the Constellation Program forward.

› View Images
› Back To Top