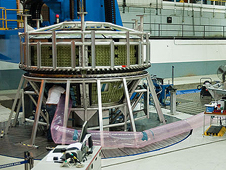 The Orion crew exploration vehicle took shape as the two halves of the crew module were fused together at NASA’s Michoud Assembly Facility in New Orleans, La. The Lockheed Martin Orion team welded the forward cone assembly to the aft barrel assembly using the next generation friction stir weld process. The 445-inch long weld is the longest such weld of its kind and will ensure optimal structural integrity for the harsh environments of space flight.

“The completion of the final welds on the Orion crew module ground test article is another important milestone,” said Mark Geyer NASA’s Orion project manager. “The team’s dedication, hard work and ingenuity kept us on schedule for the assembly, integration and further testing of the vehicle. We now have the ability to see how the crew module will respond to space environments and can validate production processes that are critical to the safety of the crew.”

Prior to flight testing, this crew module will be tested on the ground in flight-like environments, including static vibration, acoustic and water landing tests. Results will be used to correlate sizing models for all subsystems on the vehicle.

Orion weld operations take place on a Universal Weld System II (UWS II) that includes a 22-foot diameter turntable, a self-reacting friction stir weld head and a modular t-grid floor. The system affords virtually unlimited five-axis welding on fixture-mounted hardware. The UWS II is part of the National Center for Advanced Manufacturing, managed by the University of New Orleans Foundation in partnership with NASA and the State of Louisiana.

The friction stir welding process advances the state-of-the-art for circumferential welds, yielding higher strength and higher quality welds at a lower cost. The latest state-of-the-art manufacturing technologies, efficient processes and new materials, such as the ultra-light weight Aluminum-Lithium alloy, are all being employed on Orion to produce the lightest possible vehicle for space flight.

“The combination of material and manufacturing advancements in technology are key reasons why the spacecraft is more lightweight and damage resistant than many industry experts thought possible,” said Larry Price, Lockheed Martin Orion deputy program manager. “The balance of manufacturing methods and varied materials such as composites and advanced alloys that have been applied to Orion resulted in vehicle optimizations across the board - lowest cost, lightest weight, and improved structural integrity, which is critical to crew safety.”

Lockheed Martin is the prime contractor to NASA for the Orion crew exploration vehicle, which is managed at NASA’s Johnson Space Center. The Orion spacecraft is comprised of a crew module for crew and cargo transport; a service module for propulsion, electrical power and fluids storage; a spacecraft adapter for securing it to the launch vehicle, and a launch abort system that will significantly improve crew safety.

› View images
› Back To Top